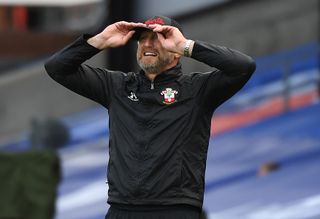 Manager Ralph Hasenhuttl knows Southampton must move quickly if they are to buy some undiscovered “jewels” to help bolster the squad before the transfer window closes.

Toulouse midfielder Ibrahim Sangare is said to be on Hasenhuttl’s radar.

Southampton have also been linked with Everton midfielder Tom Davies, potentially on a loan deal as well as Chelsea’s Ruben Loftus-Cheek.

Whatever targets the club have, Hasenhuttl  accepts they will have to be swift to get the deal over the line and fend off any other potential admirers.

“In our shop, where we have to look, we can only select players where there is any chance,” the Southampton manager said.

“If there is a chance then very often it is only a short slot where we can get them because as soon as other clubs are coming to the table, it is very difficult for us.

“But this is nothing new. It doesn’t make it easier for us, but not less interesting.”

Hasenhuttl continued: “We might have to find some jewels that no-one else is looking at, and you have a chance to make the next step.

“Anyway, I am sure that in the last two weeks of the transfer window we will have a chance of getting some players we normally don’t get.

“We have to wait for the right moment.”

Southampton head to Burnley for Saturday’s evening kick-off looking for a first win of the new season.

The Saints produced an unbeaten seven-match run when the Premier League campaign resumed in June to go on to finish in 11th place.

Hasenhuttl accepts no-one at the club can allow themselves to stand still.

“We know the Premier League is tough,” said the Austrian, who took charge at the start of December 2018.

“We know how much money other clubs invest in the summer to get better, so it’s not such a coincidence that they push a little bit harder and perform a little bit better at the start of the season.

“We need a little bit longer to adapt to this level and then hopefully we’ll be competitive again.

“It’s a nice dream if you think everybody goes so easy and switches it on again in the next season and wins again, but it is not like this.

“We are more realistic. We know in our club it’s always a battle for staying in the league and always a battle to get as quick as possible to 40 points and then we can look for more, like we did last season.

“Eleventh place in the table was fantastic for us, the best since three or four years I think.

“I don’t see any reason why we can’t get this again, but it’s only with hard work and with a better way to play like we did.”