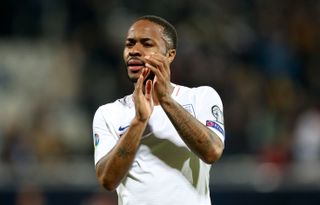 With March’s friendlies scrapped and Euro 2020 postponed due to the coronavirus pandemic, the Three Lions returned with a whimper in front of empty stands in Reykjavik after their enforced 10-month break.

Harry Kane’s disallowed strike and Kyle Walker’s red card looked to have been the key moments at Laugardalsvollur, only for England to snatch a late 1-0 win as Sverrir Ingason was adjudged to have blocked Sterling’s shot with his hand.

However, that was not the end of the late drama. Joe Gomez gave Iceland the chance to level from their own penalty, but former Aston Villa midfielder Birkir Bjarnason missed the target.

The other game in England’s group saw Belgium beat Denmark 2-0 in Copenhagen thanks to goals from Jason Denayer and Dries Mertens.

Manchester City wing-back Joao Cancelo and Wolves forward Diogo Jota were both on the score sheet as Nations League holders Portugal won 4-1 at home against Croatia.

The European champions, without talisman Cristiano Ronaldo, got their campaign under way in comfortable style as Joao Felix added to Cancelo’s opener and Jota’s strike midway through the second half.

In the other game in Group A3, Kylian Mbappe’s fine solo goal just before half-time was enough to see France win 1-0 in Sweden.

Stevan Jovetic scored twice in the second half as Montenegro won 2-0 against Cyprus while Luxembourg came from a goal down to win 2-1 against Azerbaijan, who had Mahir Emreli sent off after 25 minutes.

North Macedonia overcame Armenia 2-1 in a match where all three goals were penalties, while Georgia beat Estonia 1-0 and Graeme Torilla scored the only goal of the game as Gibraltar won 1-0 against San Marino.