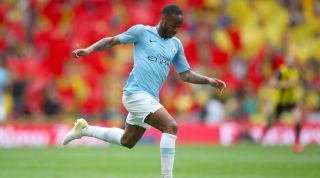 The England international, who briefly played alongside Carragher at Liverpool, has excelled under the stewardship of Pep Guardiola at the Etihad.

He departed Anfield in a £50 million move in 2015, leading Carragher to suggest that the Reds had done great business from the sale.

However, he now feels differently after watching the forward’s progression in recent seasons and even rates him more highly than Neymar.

"I never envisaged he would become as good as he is and thought Liverpool had secured a good deal to get just under £50 million," he wrote in the Telegraph.

"I was wrong. By the end of his career it will be obvious City bought him at a bargain price.

"He is now in the top five or six best attacking players in the world, in that group just below Lionel Messi and Cristiano Ronaldo.

"I wrote recently that he and Sadio Mané are the best left-sided players out there. I now rate Sterling above Neymar.

"His ambition, alongside Kylian Mbappe, should be to fill the post-Messi and Ronaldo void once they retire. He is a potential Ballon d’Or winner over the next four or five years, the current upward trajectory destined to make Sterling a global superstar."

QUIZ! Can you name the 40 players who have committed the most Premier League fouls ever?

WHO? 12 players you won't believe won the Premier League Player of the Month award