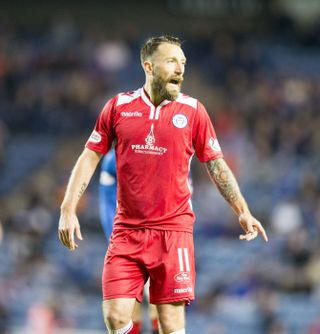 Queen of the South twice came from behind against Morton before claiming a bonus point in their Betfred Cup opener.

Queens warmed up for their home clash with St Mirren by prevailing 4-2 on penalties at Cappielow following a 2-2 draw against their Scottish Championship rivals.

Sean McGinty headed Morton a deserved opener in the 18th minute but Stephen Dobbie levelled from close range six minutes after the interval to make it 18 consecutive seasons in which he has scored.

Aidan Nesbitt netted from close range to put Morton back in front but Queens levelled in the 79th minute when James Maxwell set up Connor Shields.

Gregor Buchanan secured the shoot-out triumph to give Queens the edge in the table.

Matthew Aitken struck twice for Rovers, including a penalty opener, but Luke McCowan equalised for Ayr before Walsh and Anderson netted in an action-packed first half.

Zanatta scored an impressive fourth before setting up on-loan Aberdeen striker Anderson to net his second of the night.

Dunfermline recorded a controversial 1-0 win at Dumbarton. Kevin O’Hara netted a 26th-minute spot-kick after Morgyn Neill was penalised for a disputed handball decision.

Impressive first-half strikes from Luke Donnelly and Thomas O’Brien gave Arbroath a 2-1 win at Stirling, who pulled one back through Andy Ryan in the 76th minute.

On-loan Livingston striker Jack Hamilton headed home the opener 70 minutes into his East Fife debut as his team beat Cowdenbeath 2-0. Ryan Wallace made sure of the three points with a brilliant late volley.

Falkirk and Dundee were earlier awarded 3-0 victories after their respective opponents, Kilmarnock and Forfar, were unable to fulfil their fixtures because of Covid-19 cases.