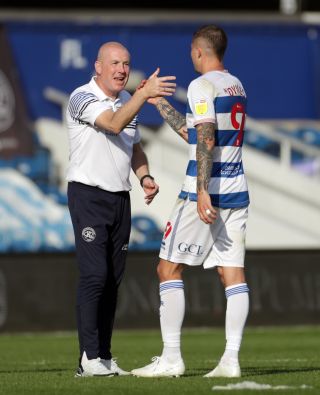 QPR manager Mark Warburton believes the club have signed a player on the up in Lyndon Dykes.

The Scotland striker scored on his debut as Rangers beat Nottingham Forest at the Kiyan Prince Foundation Stadium, thumping home a penalty before Ilias Chair added a stoppage-time second.

Dykes was signed from Livingston, where he impressed last season in the Scottish Premiership.

The Championship represents another step up for the 24-year-old and he enjoyed a memorable debut.

“That’s what we hoped he would do,” said Warburton.

“You look at him first at Queen of the South, then look at him for Livingston scoring goals for one of the smaller teams in Scotland, coming up against Rangers and Celtic and really troubling high-quality centre-halves.

“We spoke here about what he could bring and you saw what he can offer in both penalty boxes.

“His work ethic is outstanding, he can link up play and has an eye for goal.

“Teams became aware of him but we moved swiftly and got the deal done. I think it’s a fantastic piece of business by the club.”

Warburton had suggested he would leave out Bright Osayi-Samuel and Ryan Manning unless they committed their futures to the club.

Both players are in the final year of their contracts and have refused offers of a new deal.

In the end, winger Osayi-Samuel was selected, but Manning was left out of the matchday squad.

Warburton explained: “There are contract talks at different stages. Simple as that.

“I want to make sure players are focused on their game. There’s nothing derogatory or negative about Ryan, who trains exceptionally well and he’s a great lad.

“I’ve got a great relationship with Ryan and I talk to him all the time. There’s no doubting the quality of Ryan Manning.

“It’s just that many clubs have seen players walk away at the end of their contract with no value to the club.

“What we have to do is make sure that we see value. It’s about players committing to the club.

“QPR – and Ryan will appreciate this – has got to look after itself as a club.

“I hope very much that all such talks reach a suitable conclusion.”

Tobias Figueiredo brought down Dykes for the penalty and Lewis Grabban then missed a sitter as well as two other chances to equalise.

“In a decent first half we conceded absolutely nothing,” Lamouchi said.

“We had at least three chances to come back. After the penalty we created more.

“Without a mistake, and with more efficiency in the box, the game is in our hands.

“In the first game of the season you need to be patient and clever. But we were not clever and not good enough to make the difference and score.

“Lewis was not 100 percent and we saw that with those three chances.

“Lewis Grabban in these situations would usually score. It was not a bad game for him, just bad with the finishing.

“If you don’t score, don’t give anything away. We can’t accept conceding a goal in this way.”