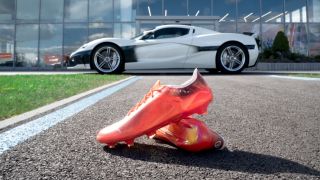 The limited-edition PUMA ULTRA SL, of which only 412 pairs will be launched, weighs a gravity defying 90 grams, combining elite-level stability, traction and lightweight properties with PUMA exclusive innovation.

'The objective of the ULTRA SL was to create the fastest, most extreme football boot possible, to give an insight into how football boots could be engineered in the future,' said Dominique Gathier, Head of Product Line Management Teamsport. 'We looked at how hypercars are built and transferred these key learnings into the creation of ULTRA SL, with particular focus on how to reduce the weight of the boot whilst maintaining elite-level performance properties.'

Rimac is a Croatian based company and was founded with the vision to create sportscars for the 21st century, striving to unleash the full potential of the alternating current electric motor. The 412 pairs that PUMA will launch of the most electric ULTRA ever, reflect the 412 km/h top speed of the Rimac C_Two hypercar.

The ULTRA SL FG’s upper is constructed of a super-light woven mesh, coated in a thin layer of TPU skin to give added durability and touch on the ball. The aerodynamic silhouette features two ‘windows’ on the heel, which are directly inspired by the body work of the Rimac C_Two. The UTLRA SL also features a PEBAX outsole and integrates a custom-made, extremely lightweight tooling engineered to boost your speed with ULTRA acceleration.

The PUMA ULTRA SL will make its debut when Antoine Griezmann takes to the pitch in the UEFA Nations League™ fixture between France and Croatia in Rimac’s home city, Zagreb, on October 14th.

The new PUMA ULTRA SL is available from October 12th at PUMA.com and at select retailers worldwide.