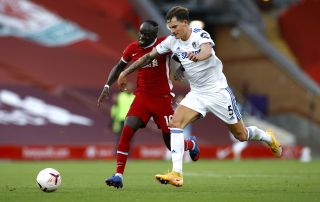 This season’s promoted sides stuck to a familiar formula on their Premier League returns, with just one new starter among the three line-ups.

That figure had never previously been lower than four since the league went to its current 20-team, three-up, three-down format in 1996.

But this time around, Leeds’ Robin Koch was alone in being pitched into the starting line-up as West Brom and Fulham each kept their new players on the bench.

Players who had previously been with their new clubs on loan were not counted towards the total, accounting for goalkeeper Ilan Meslier and winger Helder Costa, who signed permanently after loans from Lorient and Wolves respectively, and goalscorer Jack Harrison, borrowed from Manchester City for a third straight season.

That left Koch as the only new face – and even he may not have been involved had Marcelo Bielsa’s team been successful in retaining Ben White after last season’s successful loan from Brighton. Koch took only three minutes to concede a penalty which set Liverpool on their way to victory.

The Cottagers’ line-up contained only players who featured in the Championship last season, including Harrison Reed who has joined permanently after a season on loan from Southampton.

Goalkeeper Alphonse Areola and midfielder Anthony Knockaert were left on the bench, while there was no place for Antonee Robinson, Mario Lemina, Kenny Tete or Ola Aina.

David Button served as the substitute goalkeeper while centre-back Cedric Kipre was not involved.

Only six promoted teams in the Premier League’s current format have gone into their season opener without a new recruit in their starting line-up – with three of those coming in the last two seasons after Norwich took a tried and tested approach last term.

Leeds joined last season’s Sheffield United side in handing out only one debut – in the Blades’ case, Callum Robinson before his switch to the Baggies – meaning Aston Villa last season accounted for four of the six debuts among the last six promoted teams as Tom Heaton, Bjorn Engels, Trezeguet and Wesley lined up against Tottenham.

That could be a sign of a new approach but just as likely, this season’s selections may be influenced by the abbreviated build-up to the season amid the coronavirus pandemic.

Teams only wrapped up the previous campaign in late July, leaving minimal preparation time, while recruitment is not concluded yet as the transfer window remains open until October 5.

It is also only two years since Fulham themselves fielded a record-equalling six debutants – Fabri, Calum Chambers, Maxime Le Marchand, Joe Bryan, Jean-Michael Seri and Andre Schurrle – on the opening day against Crystal Palace and Wolves had four in a total of 11 for the promoted sides.