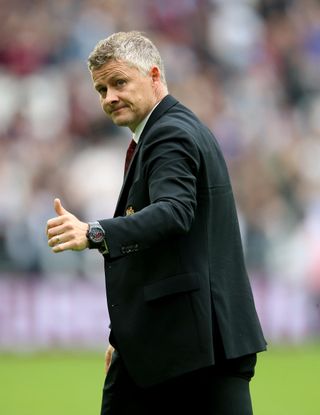 The England striker limped off with a groin problem during the second half as United’s lack of options in attack were laid bare.

With Anthony Martial still injured and youngster Mason Greenwood ill, Jesse Lingard had to fill in up front against the Hammers.

The winger may also find himself doing so against Rochdale in the Carabao Cup on Wednesday and, more worryingly for Solskjaer, when Arsenal visit on Monday week.

There could also be repercussions for England, who face Euro 2020 qualifiers against the Czech Republic and Bulgaria next month.

Rashford will have a scan on Monday but Solskjaer admitted: “He’ll probably  be out for a while.”

The 21-year-old’s absence will raise more questions about United’s summer transfer business, when they failed to bring in a replacement for Romelu Lukaku.

Of just as much concern for Solskjaer is their away form. United have not won on their travels in the Premier League since February – a run of seven matches equalling an unwanted club record.

The Norwegian’s predecessor Jose Mourinho stuck the boot in on Sky Sports, claiming he saw no improvements from last season.

“He’s got the right to his opinion,” said Solskjaer, before pointing out Mourinho’s United also lost at West Ham last year.

Andriy Yarmolenko broke the deadlock with a peach of a strike just before half-time, and Aaron Cresswell finished United off with a stunning late free-kick.

“It was a game that could have gone both ways,” Solskjaer said.

“The key moments, they grasped and we didn’t. I have to say two fantastic finishes from two good left feet. And we didn’t take our chances when we had them.

“It’s one of those moments. We’ve historically had loads of centre-backs struggling with injuries over the years.

“At the moment it’s the strikers. That’s just how it’s gone. Hopefully Mason and Anthony will be back for the Arsenal game, and at least one of them for Rochdale.”

Life looks far brighter for West Ham, whose captain Mark Noble this week claimed they could even break into the top four this season.

They are certainly heading in the right direction after a hard-fought third win in four matches, and a third consecutive clean sheet.

“I’m very happy about all of today,” manager Manuel Pellegrini said. “The way we played – I always talk with the players that we must have the mentality to play the same way we work during the week.

“It doesn’t matter if we play United or against every big team. We must trust that we are able to beat them.”