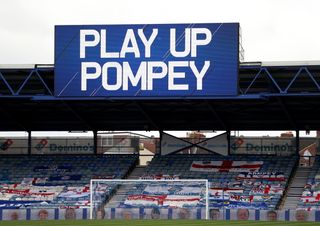 Portsmouth chief executive Mark Catlin claims he has heard rumours that some of the clubs who favoured the introduction of a salary cap are already working to circumvent it.

Catlin, who has described the £2.5million cap in League One as “totally unfair”, says agents and peers at other clubs have mentioned this to him, and that he has raised the matter with the English Football League.

The cap for the lower two divisions was agreed a month ago by a clubs vote, as a response to the “profound” financial impact of the coronavirus pandemic.

But Catlin is concerned that action will not be taken in real time against those who seek to cheat the system, and believes clubs should be barred from promotion in the season the offence takes place.

“The thing that is very upsetting for me is that some of the clubs who pushed heavily for a salary cap at £2.5million – and we are sticking rigorously to that – you hear rumours behind the scenes now that they’re doing lots of things to try to circumvent it to get one over on clubs like Sunderland, Portsmouth and Ipswich that can afford more,” he said during a Sustain The Game conference call as part of Sport Integrity Week.

“I have asked the EFL to look into it and the EFL are apparently monitoring everything that’s going on.

“It’s no good having a couple of people at the EFL monitoring this, we have to support it financially, police it, monitor it in real time, not wait so that an indiscretion happens in a certain year, that club, by cheating, gets promoted and the EFL are trying to deal with it two years down the line. It has to be dealt with there and then.

“I’m a big fan of (EFL chairman) Rick Parry and the EFL, but if any club is in breach of the regulations you do not get promoted that year.”

Catlin said he hoped the players’ union, the Professional Footballers’ Association, would achieve some concessions on the caps.

The PFA has previously described them as “unlawful and unenforceable”.

We are disappointed at the outcome of today’s votes.— Professional Footballers' Association (@PFA) August 7, 2020

Catlin favours a system where a cap overspend is permitted based on a club’s net gate receipts.

“We are all used to filling in net gate receipt forms which go to the EFL, so all we have said is the £2.5million (cap is a starting point) but any amount over that has to be on net gate receipts,” he said.

“I think it’s totally unfair that you’re asking a club at 20,000 (crowds) like us at Portsmouth Football Club to compete (with clubs) at 2-3,000. The expectations and aspirations of those two fan-bases are just totally different things.”