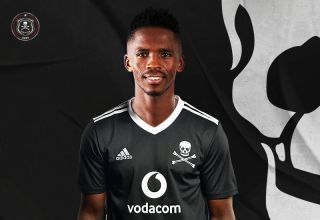 The 31-year-old joined the Buccaneers as a free agent after parting ways with the Clever Boys and has now signed a two-year contract with the Soweto giants.

The former Jomo Cosmos midfielder spent four seasons with Wits under then-coach Gavin Hunt and has managed to rack up 124 appearances in all competitions for the club, while bagging four goals and assisting a further seven during his stint with the Braamfontein-based outfit.

Monare comes in to strengthen the Buccaneers midfielder as they prepare for a congested fixture schedule during the 2020-21 campaign which includes playing in the DStv Premiership, MTN8, Telkom Knockout Cup, Nedbank Cup and the Caf Confederation Cup.

'I am happy to have signed with the Club,' Monare told his club's official website.

'I hope, like I have done in my entire career, I can make a meaningful contribution during my time here. I think this is a team that suits my style of play and that can only benefit me and the team for the season ahead.'