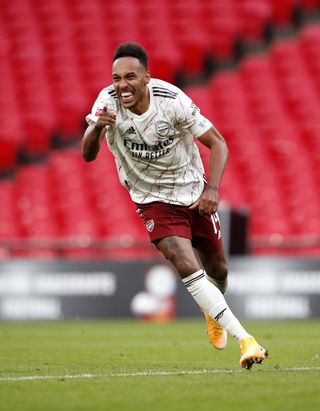 Arsenal have made two signings in recent weeks and remain in the market for more additions – but Ian Wright believes tying captain Pierre-Emerick Aubameyang down to a new deal is the most important business of the summer.

Aubameyang, 31, is understood to have already agreed fresh terms at the Emirates Stadium but there has been no official confirmation as of yet – with head coach Mikel Arteta only saying he remains confident the striker will sign a new contract.

The Gunners, who beat Liverpool on penalties to lift the Community Shield on Saturday, announced the signing of Brazilian defender Gabriel Magalhaes on Tuesday for a reported fee of £22million.

🗞 Central defender Gabriel has joined us from French side Lille on a long-term contract!— Arsenal (@Arsenal) September 1, 2020

That followed the free signing of Willian from London rivals Chelsea on a three-year deal, while the likes of Thomas Partey and Houssem Aouar continue to be linked with moves to the north London club.

But Wright, who hit 195 goals in 288 games for Arsenal, believes the importance keeping Aubameyang – whose current deal expires next summer – outweighs any other incomings.

“To be honest, I think he will be the most significant signing Mikel can make,” Wright told Good Morning Britain.

“We do need to make that happen, simply because of what he brings to that team. When you look at the chances created for Arsenal, they were 16th in the league and he still scored the amount of goals he scored.

“So if you can imagine, we can start creating more with the players we have signed – the Willians and people like that – then he is going to score more goals. It is imperative that he signs.”

Aubameyang netted the winning penalty against Liverpool after opening the scoring early in the game – he also hit both goals in the FA Cup semi-final win over Manchester City and the victory over Chelsea in the final on August 1.

Having lifted the FA Cup and Community Shield in their last two matches, there is more optimism around Arsenal than in recent years.

Wright praised Arteta, who was only appointed in December, for changing the culture at the club – but warned supporters must only concern themselves with what is happening at Arsenal and not elsewhere as teams such as Chelsea continue to spend big.

“When you look at our manager he is a very focused, driven guy and knows exactly what Arsenal are about,” Wright added.

“When you look at the transformation and culture change under Mikel Arteta, you have to say we are on the right track and that is the only thing you want to worry about right now.

“We have to just worry, as Arsenal, what we are doing and the slow progress we are making at the moment.”