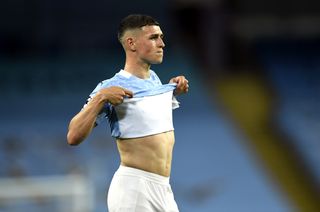 Phil Foden has issued an apology after he and Mason Greenwood were sent home by England for what Gareth Southgate called a “very serious” breach of coronavirus regulations – as the Football Association announced a full investigation into the incident.

Within 48 hours of making their Three Lions debut against Iceland, the Manchester City playmaker and Manchester United forward are having to leave the camp after breaching the strict bio-bubble in Reykjavik.

Allegations emerged in the Icelandic media on Monday that Foden and Greenwood had spent time with two girls during the trip, with media outlet DV publishing purported footage filmed by one of them.

With an FA investigation now hanging over the pair, Foden issued an apology via Twitter and vowed to “learn a valuable lesson from this error in judgement”.

“I apologise to Gareth Southgate, to my England team-mates, to the staff, supporters and also to my club and my family,” he wrote.

“I am a young player with a lot to learn, but I am aware of the huge responsibility I have in representing Manchester City and England at this level.

“On this occasion I made a poor decision and my behaviour didn’t meet the standards expected of me.

“I breached Covid-19 protocols put in place to protect myself and my England colleagues. As a consequence I will now miss the opportunity to travel to Denmark with the squad, and that hurts.

“I will learn a valuable lesson from this error in judgement and I wish Gareth and the team good luck this week.”

Speaking on Monday afternoon, Southgate said: “It’s a very serious situation and we have treated it that way and have acted as quickly as we have been able to.”

The @FA has issued a statement following today's news that Phil Foden and Mason Greenwood have left the #ThreeLions camp:— England (@England) September 7, 2020

The FA has vowed to fully investigate the circumstances leading up to the breach in Reykjavik.

“Whilst in Iceland, both Phil Foden and Mason Greenwood spent time outside of our private team area, which was a breach of our Covid-19 duties,” the governing body said in a statement.

“While they did not leave the team hotel, it was an unacceptable breach of our protocol. They have both apologised for their serious lack of judgement.

“The FA will be launching a full investigation into the circumstances leading up this breach. We have spoken to the Football Association of Iceland to offer our apologies for this incident and to ensure them that we are taking the appropriate steps.”

The youngsters’ behaviour has not only gone down badly with the FA but their respective clubs, with City swiftly condemning Foden’s behaviour.

A club statement read: “It is clear that Phil’s actions were totally inappropriate. His behaviour not only directly contravenes strict guidelines related to Covid-19, but also falls well below the standard expected of a Manchester City player and England international.

“The club supports the FA regarding this incident, and officials from the club are now in touch in relation to Phil’s enforced early return to the UK.”

Manchester United released a statement at a similar time, saying: “We are liaising with the Football Association and are disappointed with the actions of Mason Greenwood over this situation.”

Southgate – who called the pair “naive” – also refuted suggestions that players may feel they can flout the rules because he gives them plenty of leeway.

“I think we like to have a good relationship with the players, but the players that have worked with me for a long time know I’m not afraid to make tough calls, so no, I don’t agree that is the case,” he replied when he was asked if players may see him as a ‘soft touch’.

“I don’t think I can be responsible for discipline when players are not with us. We then have to make decisions on how we approach it.

“I think whenever there have been issues, whether it’s been as an Under-21 coach or senior coach, we’ve dealt with them internally, so I think we’ve been very strict and firm.”

While this is the latest off-field incident which Southgate has had to contend with he maintains he is honoured by his position and can deal with the extra baggage that comes with managing his country.

“You happen to be a spokesman for the nation. So, it is completely unique – it has been great to get on the pitch and work with the players – the rest, I have to park and accept that as part of the job.