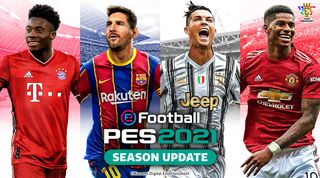 Given that it's only a Season Update and not a full game, you can now get PES for ┬Ż24.99. There are updates for all the kits, player ratings and transfers that you'd expect though - and given that eFootball PES 2020 that was awarded ŌĆ£Best Sports GameŌĆØ at E3 2019, you can be sure that it's still the same great game, just upgraded.

Juventus' Cristiano Ronaldo is the latest star to be named as an official eFootball PES ambassador - and he features on the cover this time around. He's next to Lionel Messi for the first time - even FIFA haven't managed that yet - and apparently, the pair are set to take part in "promotional activities" together. We look forward to seeing them together.

Also squeezed onto the cover are England and Manchester United hero Marcus Rashford ŌĆō who's transcended his considerable football talent this year with his charitable campaigns ŌĆō and recent Champions League winner Alphonso Davies of Bayern Munich. It's pretty cool that despite the two biggest stars in football over the past 20 years making it onto PES's cover, Konami still have time for two younger talents set to define the 2020s.

All four ambassadors are set to feature in the brand-new Club Editions for eFootball PES 2021 season update. Each Club Edition includes one Iconic Moment Series player, full myClub squad and much more.

Existing PES 2020 or PES 2020 LITE users are eligible for a 20% discount on any Club Edition if purchased through those games, available until October 29 2020.

One of the big reasons for the reduced update this season is due to the 2022 version of the game set to be even bigger and better.

Currently, the development team at Konami are working on eFootball PES 2022. This will see the Fox Engine - which currently runs PES - replaced by Unreal Engine 5 on its ninth-generation versions.

Essentially, that just means it's going to look hella super cool on the PS5 and Xbox Series X.