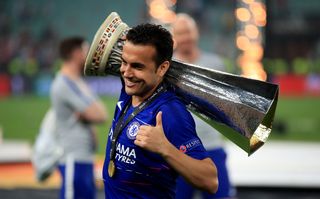 Former Chelsea winger Pedro has joined Roma on a three-year deal, the Serie A side have announced.

The 33-year-old World Cup 2010 and Euro 2012 winner left Stamford Bridge at the end of the campaign after spending five seasons with the club.

During his time in London, Pedro helped Chelsea win the Premier League, FA Cup and Europa League, while his CV also contains five LaLiga titles and three Champions League successes from his time at Barcelona.

“I am delighted to be here at Roma,” he told his new club’s website.

“I’m excited for this challenge and to compete to achieve our targets over the coming seasons.

“I want to thank the fans for the welcome they’ve given me. I hope to make them happy.”

Roma chief executive Guido Fienga said: “It’s a privilege for us to be able to welcome a player of Pedro’s quality to the Roma family.

“The hope we have, for both him and for us, is that he can continue to add to his extraordinary list of achievements with AS Roma.”