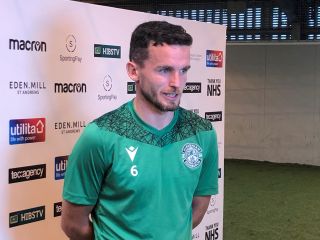 Paul McGinn reckons he is living the high life with table-topping Hibernian.

The 29-year-old has had enough of scrapping it out at the bottom of the table in recent years.

Relegated with Partick Thistle in 2018, he had another brush with disaster 12 months later before former club St Mirren survived dropping into the Championship with victory over Dundee United in the play-offs.

So far this season, however, McGinn is experiencing the opposite end of the spectrum with his new side.

Jack Ross’ Leith outfit have only dropped two points from their first four games and while McGinn knows his team will be under pressure to maintain that run from the Easter Road faithful, he would rather live with that pressure than the suffocating threat of relegation.

“It’s nice to be at this end of the table,” said the full-back ahead of Sunday’s visit to St Johnstone.

“I played well when I was at St Mirren but you don’t tend to get the plaudits when you’re down at the bottom.

“But when you’re with a team at the top you starting getting that praise – that’s just the way football works.

“I’m just glad we’ve had such a good start and not sitting at the bottom looking up the ways for a change.

“There’s a difference in pressure at a club like Hibs. You’re expected to win.

“It’s maybe not Celtic and Rangers levels of pressure but we are expected to win most games.

“It’s a much nicer pressure than having to fight for your lives down the bottom, I can tell you that straight away.

“Did it take much to get used to that change? No – winning is something you always enjoy so you grab the opportunity whenever it comes.”

Saints picked up their first win of the campaign last weekend at Kilmarnock but slumped again on Thursday as they were edged out by Aberdeen.

But McGinn reckons Callum Davidson’s side will be a tough nut to crack.

He said: “I thought they were the better team on Thursday night. They maybe lacked a bit of creativity but barring the mistake at the goal I couldn’t see them conceding.

“We know it will be really difficult on Sunday.”