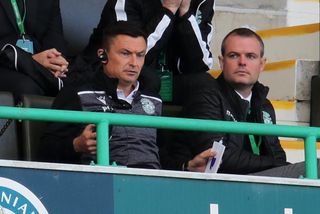 Hibernian manager Paul Heckingbottom described the incident which led to his dismissal in the 1-1 draw against Celtic as a “shambles” and a “farce”.

Hoops defender Kristoffer Ajer put a Christian Doidge cross into his own net in the seventh minute at Easter Road but the Ladbrokes Premiership champions levelled in the 24th minute after referee Kevin Clancy belatedly blew for a foul on Celtic winger James Forrest in his own half.

Amid some confusion, when play restarted Celtic right-back Moritz Bauer was sent down the right by midfielder Olivier Ntcham and Ryan Christie headed in the cross.

He admiited he should not have done that but then swore at fourth official Nick Walsh which led to him being sent to the stand by Clancy.

“There is a swear word in there and I said it was his fault that he gave it,” said Heckingbottom.

“The ball was pulled back for something the fourth official seen.

“That is not transmitted to the players.

“Some players think it is a drop ball and they are getting the ball back or something,  others understand it was a free-kick.

“It was a shambles, it was farce, that spell of play.

“No one appealed. Some thought it was because Forrest was down with an injury.

“It was a farce but we will be looking  at why we didn’t deal with it and how they scored.”

Heckingbottom claimed the biggest injustice of all was Ntcham being only yellow carded in the 38th minute for raising his hands to Josh Vela, who was also cautioned.

Asked if the Hoops midfielder should have been sent off, the Hibs boss said: “Come on. Three times for the three punches.

“That’s the biggest injustice. Everyone has been let down by that.

“All the supporters, all the players, everyone connected with the club.

“There was an incident, a couple of arms thrown, he can claim he didn’t see it, fine, but he is stood between the two players when the third one comes in on the end of his chin.

“You tell me why he wasn’t sent off.

“Everyone has bad games but there was something different about that, that’s not right.

“That is the injustice I am feeling right now.”

Neil Lennon also harboured a sense of injustice, claiming Celtic were denied two “clear cut” penalties in the second half after Christie was tackled by Lewis Stevenson before Bauer was challenged by Hibs substitute Daryl Horgan.

He said: “It was a good performance. I am not going to criticise the players.

“We have made a tremendous start to the season and while I am not here to criticise referees I thought we should have had two clear cut penalties.

“Daryl Horgan has taken out Bauer and Stevenson has taken out Ryan Christie, also as he has gone to cross it. They are two penalties. At least give us one.

“We deserve that, we earned the right to a penalty.

“We are 40 yards away and still have a great view of it and you know when a foul is a foul.

“But the reaction was good and we really tried to force the issue in the second half but it wasn’t to be today.”