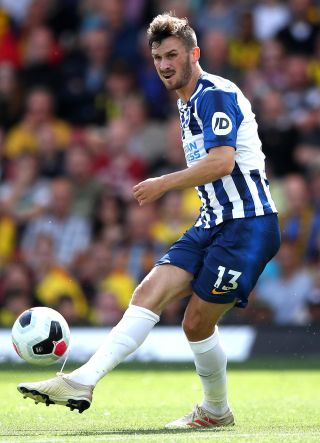 Pascal Gross has stressed the need for Brighton to get back to the kind of home form that they showed in their debut Premier League season.

When they finished 15th in 2017-18, the Seagulls accrued 29 of their 40 points at the Amex Stadium, a figure giving them the eighth-best home record in the division.

Last term it was 23 points earned at home out of 36, but they have not won a competitive match at their own ground since March.

Ahead of Saturday’s home league clash with Burnley, midfielder Gross told Brighton’s official website: “We’re at home on Saturday and we have to show that we’re strong at the Amex, because that will be massive for us throughout the season.

“We were very strong at home in our first season in the Premier League, and we need to get back to that.

“We should be brave and confident on Saturday; it’s another opportunity to win and hopefully we can take more points from Burnley than we managed to last season.”

Brighton lost 3-1 in this fixture last season and were also defeated 1-0 by Burnley at Turf Moor earlier in that campaign.

After they ended the season winless in nine games and lying in 17th place, boss Chris Hughton was replaced by Graham Potter.

So far this term, they have won 3-0 at Watford, drawn 1-1 with West Ham at home, lost 2-0 at the Amex to Southampton and 4-0 at Manchester City, as well as winning 2-1 at Bristol Rovers in the Carabao Cup.

Midfielder Dale Stephens has been impressed with the new manager’s impact.

“He’s been good ever since he walked through the door and had a brilliant impact on the team’s performance, especially after changing the philosophy from last year to this year,” Stephens said of Potter.

“It doesn’t matter too much about the system we play, as he’s more of a positional coach and we still take up similar positions regardless of the formation we play.

“It’s been a good start to the season in terms of our performances, we’d like to have a few more points on the table, but one of those games was Man City away.

“We want to build on what we’ve done in the first few games of the season and carry on the momentum going forward.”