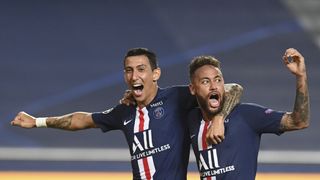 Paris St Germain are one win away from Champions League glory after claiming an emphatic 3-0 win over RB Leipzig in the semi-final in Lisbon.

The French side have been chasing success in the premier European competition ever since they were taken over by Qatari investors in 2011, but they had only previously got to the quarter-final stage.

But they booked their place in the final thanks to goals from Marquinhos, Angel Di Maria and Juan Bernat and are on the cusp of finally achieving their goal of becoming European champions.

They will now wait to see who they meet, with the second semi-final between favourites Bayern Munich and Lyon on Wednesday.

For Leipzig, it is the end of their impressive Champions League journey which saw them beat Tottenham and Atletico Madrid in the knockout stages and 33-year-old boss Julian Nagelsmann leaves the tournament with his reputation sky high.

But they exited with a whimper as PSG controlled the entire game.

Thomas Tuchel’s men could have gone in front inside the opening 10 minutes as Neymar’s pursuit of a goal started early as he hit a post when played through by Kylian Mbappe.

But they did not have to wait long to go in front as Marquinhos headed them in front in the 13th minute when he met Di Maria’s inviting free-kick.

Leipzig, who were missing the threat of departed striker Timo Werner, had their big chance to change the course of the game in the 25th minute when Konrad Laimer advanced down the right and teed up Yussuf Poulsen, but he skewed an effort from eight yards wide.

Neymar, who had earlier fizzed an effort wide, struck the frame of the goal again when he caught Peter Gulacsi off guard from a free-kick when the keeper was expecting the Brazilian to cross.

PSG got their second in the 42nd minute and Gulacsi was to blame.

Playing out from the back, he misplaced a pass, which allowed Neymar to brilliantly flick into Di Maria’s path and he made no mistake from 10 yards.

It was another defensive howler that saw PSG kill the game 11 minutes after the restart.

Nordi Mukiele slipped in possession, allowing Di Maria to pick out Bernat and the midfielder made no mistake with his free header.

PSG had chances to make it even more comfortable as Bernat stung Gulacsi’s palms with a low effort while Neymar and Mbappe somehow managed to make a mess of a two versus one counter-attack.

Still, the job was done and their attention will now turn to Sunday night’s showpiece.