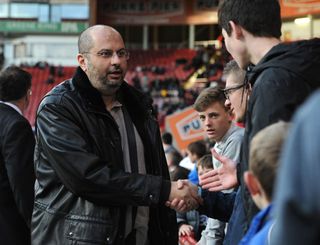 Sheffield United owner Prince Abdullah has assured the club’s fans he will do all he can to take them to “a bigger and better place”.

Prince Abdullah won full control of the Premier League club on Monday when a bitter legal dispute with co-owner Kevin McCabe was settled by a high court judge in his favour.

“I can assure everybody that we will work hard to make the fans proud to make everything better,” Prince Abdullah told a press conference at Bramall Lane.

“I am, and my team is, 100 per cent committed to the club. Actions speak louder than words.”

“So I hope in five years’ time when fans look back on this day, things will be much better and we will be with Chris (Wilder), taking us to a bigger and better place.”

Prince Abdullah, full name Prince Abdullah Bin Mosaad Bin Abdulaziz Al Saud and a grandson of King Abdulaziz, the founder of modern Saudi Arabia, insisted he has the credentials to back his claims after his role as president of Saudi football club Al-Hilal.

“It won the club of the century in Asia, it has a huge fan base,” he said. “It won more trophies than any other Asian club. It is a big club and has not gone, in the last 40 years, back-to-back years without a trophy.

“I’m connected in the football world, I know the good agents. I know the business of football and I’ve been in football all my life, it’s my passion.”

In the High Court on Monday, Mr Justice Fancourt ruled that McCabe must sell his 50 per cent stake in the Blades to Prince Abdullah, who owns the other 50 per cent, for £5million, in line with a 2013 investment and shareholders agreement.

The judge also said Prince Abdullah’s UTB firm will have to buy the club’s property assets, valued between £35-40m, which include Bramall Lane stadium and the Sheffield United hotel, from McCabe’s company Sheffield United Ltd.

Prince Abdullah told the press conference that it would not be a problem to finance the purchase of the assets and that money would be made available to manager Chris Wilder – who he wants to be with the Blades long term –  to strengthen his squad in January.

He also defended the Bin Laden family after it had been revealed in court that members had loaned Prince Abdullah £3million during his time as co-owner at Bramall Lane.

“I really get offended when people say the Bin Laden family is a bad name. Bin Laden is a really good family. Every family may have one bad person,” he said.

Prince Abdullah insisted he did not hold a grudge against previous co-owner McCabe, despite their legal battle which lasted over 18 months.

Despite already knowing the High Court had ruled in his favour, Prince Abdullah said, he arranged a meeting with McCabe in Paris in a bid to reach an out-of-court settlement.

“I like many things about Kevin. I like his family, I like (sons) Kevin and Scott. I tried to find a better way to end his relationship with the club.”