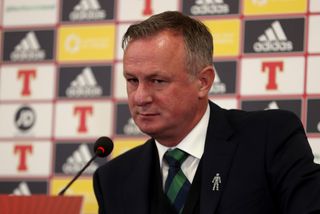 Michael O‚ÄôNeill was left to rue to the lack of Premier League experience in his side after Northern Ireland‚Äôs spirited display was not enough in Monday‚Äôs Euro 2020 qualifying defeat to Germany.

O‚ÄôNeill could only look on with envious eyes at the resources available to his opponents, who triumphed 2-0 thanks to Marcel Halstenberg‚Äôs thunderbolt early in the second half and a stoppage-time second from Serge Gnabry.

This may be a new-look Germany side, featuring only two survivors from the team that beat Northern Ireland 3-1 in Belfast two years ago, but 10 of the 11 players in Joachim Low‚Äôs starting XI are playing Champions League football this season.

In contrast, O‚ÄôNeill had only four Premier League players in his side ‚Äì three if Bailey Peacock-Farrell, yet to feature for Burnley since his summer move from Leeds, is discounted.

All three of those players ‚Äì Jonny Evans, Craig Cathcart and Jamal Lewis ‚Äì lined up in defence, but it is in attack that Northern Ireland could use an injection of quality.

‚ÄúAny international manager wants their players playing at the top level,‚Äù O‚ÄôNeill said. ‚ÄúThat‚Äôs more difficult for the smaller nations ‚Äì Scotland, Wales, ourselves ‚Äì but that‚Äôs a consequence of the Premier League and I don‚Äôt see that changing.

‚ÄúIt‚Äôs great that we‚Äôve got Jamal in the Premier League with Jonny and Craig but I think that‚Äôs something we‚Äôre continually going to be fighting against.

‚ÄúRealistically, it‚Äôs hard to see how players can get to that level and get above the Championship level.

‚ÄúThat‚Äôs fine when you‚Äôre playing in the middle tier of European football and we are in that middle tier, but when you come up against the big countries it‚Äôs a different level.

‚ÄúThat‚Äôs mostly in the final third. Our three Premier League players play in the back four and that‚Äôs the challenge we face.‚Äù

Peacock-Farrell may be struggling for playing time at club level but he was arguably Northern Ireland‚Äôs best player as he made a string of saves to keep his side in the game.

‚ÄúHe played very well,‚Äù O‚ÄôNeill said of the 22-year-old. ‚ÄúHe‚Äôs a young goalkeeper with not a lot of experience either at international level or in first-team football. He‚Äôs not had any first-team minutes for six months so I was pleased with him.

‚ÄúHe knows himself his kicking could have been better but it was a big night with some big saves at an important part of the game.

Northern Ireland had matched the four-time World Cup winners for most of the first half, even having the better of the opening exchanges, but once left chasing the game O‚ÄôNeill did not have the strength-in-depth on his bench to call on.

While Low introduced the highly-rated Bayer Leverkusen midfielder Kai Havertz and Juventus‚Äô Emre Can to close the game out, O‚ÄôNeill turned to 20-year-old Linfield striker Shayne Lavery and Gavin Whyte, who was himself playing in the Irish League only 18 months ago with Crusaders.

Finding that cutting edge will be key to Northern Ireland‚Äôs hopes of beating either Germany or Holland to a qualifying place out of Group C.

‚ÄúIt‚Äôs an area where we have to do better,‚Äù O‚ÄôNeill said. ‚ÄúWe were able to win the ball and create opportunities and did extremely well but ultimately we didn‚Äôt take them.

‚ÄúWe can pat ourselves on the back and say we gave it everything or look at it and say we wasted opportunities. That‚Äôs certainly how I feel about it and most if not all of the players in the dressing room feel that way about it too.‚Äù