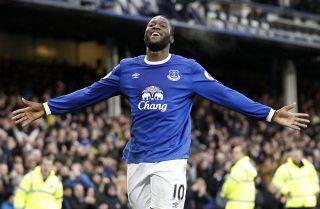 Romelu Lukaku completed a permanent transfer to Everton from Chelsea on this day in 2014 for a club-record fee of £28million.

The Belgian had enjoyed a productive loan spell at Goodison Park the season before where he scored 16 times in all competitions and agreed a five-year deal with the Toffees.

It ended Lukaku’s stay with Chelsea after he signed for the club in 2011 as a teenager before temporary stints away from Stamford Bridge at West Brom and then Everton.

On Merseyside, the forward enjoyed great goalscoring success and hit 20 or more in each of his three seasons there.

Lukaku established himself as a regular for his country during his three years at Everton too, but was unable to lead the club back into Europe after doing so during his loan in the 2013-14 campaign.

With a desire to be in the Champions League, the striker joined Manchester United in July 2017 for an initial £75million fee.

Reunited with former Chelsea boss Jose Mourinho, Lukaku fired 27 goals during his debut term at Old Trafford – including his 100th in the Premier League against Swansea.

A second-placed league finish and FA Cup final appearance was long forgotten once the Red Devils made a poor start to the following season and Mourinho was sacked in December 2018.

Ole Gunnar Solskjaer replaced the Portuguese coach and Lukaku, just six months after he had netted four times at the World Cup to help Belgium finish third, found himself in and out of the side.

He was allowed to leave United in the summer of 2019 and moved to Italy to sign for Inter Milan for a reported £74million transfer fee where he has flourished under Antonio Conte and scored 29 goals in his debut season.