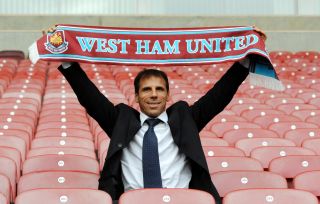 Gianfranco Zola was appointed as West Ham manager on this day in 2008.

The Italian signed a three-year deal at Upton Park as he succeeded Alan Curbishley, who had resigned earlier that month.

Aged 42, Zola came in with a coaching CV showing only a two-year spell working with Italy’s Under-21s.

The former Chelsea great said he would try to “make it as enjoyable as possible for the players” and stressed that his philosophy was to play attacking football.

The Hammers subsequently finished that season ninth in the Premier League, and in April 2009 Zola signed a deal to keep him at the club until 2013.

However, the following season brought just eight league wins, the team ended up 17th in the table and two days after the conclusion of the campaign it was announced Zola’s contract had been terminated.

He went on to manage Watford from the summer of 2012 to December 2013 and subsequently had spells as boss at Cagliari, Qatari outfit Al-Arabi and Birmingham.

Zola then spent the 2018-19 season back with Chelsea, as part of then boss Maurizio Sarri’s coaching staff, before departing soon after Frank Lampard took charge.