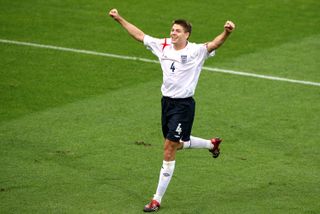 On July 21, 2014 England and Liverpool captain Steven Gerrard announced he was retiring from international football.

The decision came after the Three Lions’ dismal showing in the World Cup, where Roy Hodgson’s men went out at the group stage.

The midfielder had won 114 caps over the space of 14 years and was another member of the ‘Golden Generation’ to retire with no major honours to show from his international career.

He was handed his debut by Kevin Keegan as a fresh-faced 20-year-old in a 2-0 win over Ukraine at Wembley in 2000 and was named in the squad for the European Championship later that summer, coming on against Germany in the group stage.

It was against the Germans that he bagged his first goal the following year, a memorable strike in a famous 5-1 World Cup qualifying win and, along with two goals at the 2006 World Cup, that was arguably his best moment in an England shirt.

He would have had a place in history as the only Englishman to play in four World Cups had injury not kept him out of the 2002 tournament in Japan and South Korea.

He still enjoyed a fine career, scoring 21 goals and assumed the captaincy in his final four years in the England shirt, but the disappointing 2010 and 2014 World Cup campaigns were tough to take for the Liverpool man.