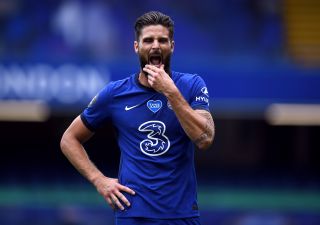 Olivier Giroud is understood to want to stay at Chelsea and fight for first-team football despite interest from Juventus.

Giroud fired his 40th goal for France in Les Bleus’ 4-2 victory over Croatia on Tuesday in warming up for the start of the new Premier League campaign.

Chelsea have launched a major squad overhaul this summer, shelling out more than £200million on a string of high-profile recruits, not least Germany striker Timo Werner.

Nice to be back to training and to see the lads ✊🏼💪🏼🙏🏼 #ChelseaFC#Smile#Bluespic.twitter.com/QvQYK2sjmf— Olivier Giroud (@_OlivierGiroud_) August 25, 2020

Giroud racked up seven goals in 12 games in all competitions to close last season in style, after football’s resumption following the coronavirus lockdown.

But the 33-year-old Giroud played a vital role at the tail-end of last term, a contribution which is by no means lost on Chelsea boss Frank Lampard.

The Blues have allowed Michy Batshuayi to take up a year-long loan at Crystal Palace, the Belgium striker returning to the Eagles for a second stint.

Giroud had options to leave Chelsea in January but both the France forward and the club hierarchy eventually opted to keep him in west London.

Serie A giants Juventus are understood to be interested in luring Giroud away from Stamford Bridge, but Giroud’s representatives have not had any contact with the Turin outfit.

Chelsea will launch their new Premier League campaign at Brighton on Monday with new recruits Kai Havertz and Werner in line for their top-flight debuts.

Hakim Ziyech will miss out with a knee injury that could require several weeks’ recovery, while Ben Chilwell has not yet sufficiently beaten his heel concern to feature at the Amex Stadium.

Christian Pulisic is in contention after hamstring trouble, with the USA star having taken the coveted number 10 shirt after Willian’s departure to Arsenal.

Club captain Cesar Azpilicueta has also shaken off his own hamstring problem, and will also be pushing to feature.