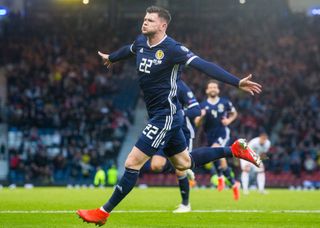 Sheffield United have completed their fourth signing of the week after clinching a deal for West Brom forward Oli Burke which sees Callum Robinson move in the opposite direction.

The Scotland international has signed a three-year contract, following Derby pair Jayden Bogle and Max Lowe and a loan deal for Chelsea’s Ethan Ampadu on Monday.

Burke made his professional debut for Nottingham Forest aged 17 before a high-profile move to Bundesliga side RB Leipzig in 2016, only to return to England with the Baggies in a £15million deal a year later which broke his own record as the most expensive Scottish footballer.

However, he failed to establish himself in the West Brom team and, after loan spells at Celtic and Alaves, the 23-year-old will look to reignite his career at Bramall Lane.

“We needed a touch of pace and Oli certainly gives us that. We’ve been working on it for a few weeks and obviously we wish Callum (Robinson) all the best,” Blades boss Chris Wilder told the club’s website.

“It’s a move that suits all parties and we are delighted to have Oli in the building.

“He’s had a couple of big moves in the past that haven’t gone as he’d have hoped, but it’s down to us now to give him a kick-start and he’s got all the attributes we want and need.

“When you put it on paper at the end of the window and take a sigh, it’s been an outstanding summer for us, we will 100 per cent be stronger than when we stepped through the door into the Premier League and that’s how it has to be.”

Robinson, who enjoyed an impressive loan spell at The Hawthorns in the second half of last season, has signed a five-year deal with the Baggies.

“We’re delighted to welcome back Callum, who really enjoyed his time at the club on loan and showed his capabilities from the moment he arrived,” he said.

“We have seen his ability out wide and also feel he has the capacity to be equally effective in the central areas.

“There is a belief here that there is a lot more to come from Callum under Slaven’s guidance and his development will be another important asset for the club.”