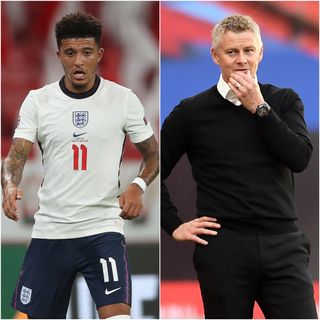 Ole Gunnar Solskjaer would not talk about the pursuit of Jadon Sancho but knows Manchester United need to strengthen the squad to keep developing.

The 1999 treble hero’s first full season in the Old Trafford hotseat was promising, with the side reaching three cup semi-finals and finishing third in the Premier League.

But a club like United demands more and they have been slow to act in the transfer market, with peripheral players yet to be moved on and Donny Van De Beek the only summer signing to date.

Their well-documented pursuit of England star Sancho has stalled as Borussia Dortmund demand 120million euros (£108m), but Solskjaer has not given up on bringing in new faces.

“Of course we’ve done some business with Donny,” the United boss. “I’m very happy, delighted to get him in – exceptional smashing lad, very good player that will give us something.

“You know I can’t say anything about other clubs’ players out of respect to them. I can’t speculate.

“But we understand that to get even further 1) we need to develop what we have, 2) we’re also looking to strengthen the team, of course we are.

The lack of activity has led to widespread fan discontent, with calls for the Glazer family and executive vice-chairman Ed Woodward to leave regularly trending on social media.

Asked if he understood the supporters’ frustration at the lack of acquisitions heading into the new season, Solskjaer said: “Fans will always want the best possible team to watch, the best possible Man United team, and that’s the passion we want.

“Of course the history we’ve had, we can look back 10 years, 20 years and of course you look back at the great players we’ve had.

“Since Sir Alex left we’ve been average, averaging fifth position. Last season we got third, which was a big step forward.

“Of course we want to take a step forward, we want to develop and we can go into the season with confidence.

“But we’re always looking to give the players, the group, a boost and we’re working on it.”

The 19-year-old has featured seven times for Solskjaer’s first-team and was named the club’s 2019-20 Under-23 Player of the Season on Thursday.

Garner will wear the number 16 at Watford and is available to make his debut at Sheffield Wednesday on Saturday.