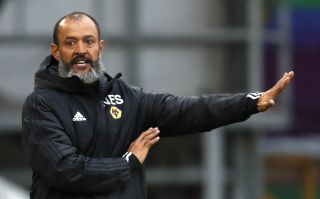 The Portuguese, who has overseen Wolves’ promotion from the Championship and a pair of impressive seventh-place Premier League finishes since joining in 2017, had a year left to run on his existing deal.

But ahead of their first fixture of the 2020-21 campaign at Sheffield United on Monday evening, Nuno has, as expected, put pen to paper on a new deal.

A statement on the club’s website said: “Nuno Espirito Santo has committed his long-term future to Wolves by signing a new three-year-deal on the eve of the 2020/21 season.”

Wolves overcame Spanish side Espanyol and Greek outfit Olympiacos en route to the quarter-finals of last season’s Europa League before being knocked out by eventual champions Sevilla following a 1-0 defeat.

Nuno has therefore been rewarded with a new deal but he insists he is only looking forward as he seeks a third successive top-half Premier League finish.

He said: “I feel good. Ready for it. Looking forward to it. Working really hard for it, because it’s a new cycle, no matter what you did before, it’s about what’s in front of us and this is what we think we should do.

“Let’s prepare well, let’s challenge, do the way we do things, fight for it.”

Nuno added: “The next game is coming, just around the corner. If this match is for our fans, they know me, it’s a day by day process.

“It’s a commitment that you make yourself, to each day have a chance to help to do something good.