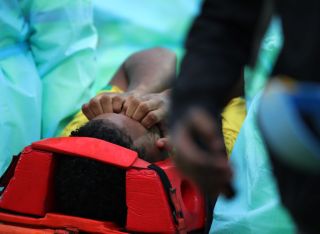 Bafana Bafana coach Molefi Ntseki believes losing Lyle Foster in the first half was a huge setback for the team.

The South African national team failed to secure a win during the international break following their 2-1 defeat to Zambia at the Royal Bafokeng Stadium on Sunday afternoon.

South Africa broke the deadlock early in the first half when Percy Tau played a delicate pass to Keagan Dolly, who beat the Zambian goalkeeper to slot the ball into an empty net.

However, two late goals in quick succession from Kelvin Kapamba and Chaniza Zulu saw Zambia came from behind to secure a late win in Rustenburg.

Ntseki admits that the team were thrown off by Fosters’ injury after he was stretched off in the second minute of the first half and subsequently replaced by Dolly.

‘If you lose a player in the second minute of the game, it messes up everything. I think it was a huge setback to lose Lyle in the beginning of the game and the plan was not to make substitutions as early as we did,’ Ntseki told SABC.

‘That did not give us the rhythm that we were looking for. We kept on giving the ball away. In the first half, we played like a team with no confidence and that's what really killed the momentum in the team. We gave away too many corner kicks early in the game.

‘I tried to push them, to give them the confidence and the belief. We spoke about it at half-time, we addressed the issues we saw in the first half. And that's why when we started in the second half, it was a better performance.

‘When you concede two goals in a game like this in the second half, there are a lot of questions you need to ask yourself defensively. These are professionals. They are fully aware of those situations. We'll go back and look at the game itself and do the analysis and when we report for camp, we will be addressing those negative issues.

‘I think it was good preparation. This is the game that for Micho was very important. He is at the bottom log. We are also trying to get to the top of the log. The question was; are the players going to be ready for the AFCON qualifiers next month? And I think they have answered those questions.’