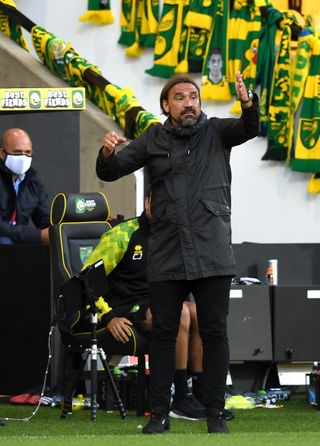 Norwich have continued rebuilding for life back in the Sky Bet Championship with the signing of American striker Sebastian Soto and 18-year-old former Arsenal midfielder Matthew Dennis.

Luxembourg forward Daniel Sinani and Coventry left-back Sam McCallum will also join up ahead of the new campaign as the Canaries plot a swift return to the Premier League after finishing bottom of the table.

Soto, 20, heads to Norfolk after his deal with German second-tier side Hannover expired, while Dennis was also another player signed out of contract.

Frontman Soto played at the Under-20 World Cup in 2019, where he helped the United States reach the quarter-finals and has also spent time with Major League Soccer outfit Real Salt Lake.

“It’s a proud feeling. It’s super exciting to join Norwich City. The facilities here are really impressive. From the minute I arrived here, it’s given me a lot of excitement,” Soto, who has signed a deal through until the summer of 2023, told the club’s official website.

“Being a young player, it’s nice to hear that the head coach gives us a chance. It was a big factor in me moving here.

“I’m a striker that loves scoring goals. I love being part of a good team that plays good football.”

Dennis, meanwhile, came through the Arsenal youth ranks, and went on to play for the under-23s. The midfielder has signed a contract with Norwich until 2022.

“I know Josh Martin, as we were both at Arsenal together. He’s a really good friend of mine and seeing him break through to the first team gives me confidence and belief that I can do the same.”

Dennis added: “The pitches here are great. The gym is nice, the food is nice, so everything is good.

“I’m most looking forward to proving to everybody what I can do, playing in front of the fans and changing the game.”

Norwich ended the Premier League campaign with a 5-0 trashing at Manchester City, having lost all of their matches since the restart.

The Norfolk club maintain they are under no pressure to sell players.

However, the likes of midfielders Todd Cantwell and Emi Buendia are expected to attract plenty of interest along with defensive trio Max Aarons, Ben Godfrey and Jamal Lewis.