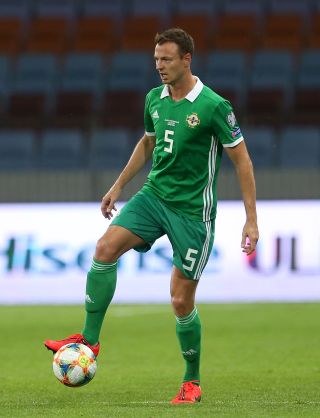 Jonny Evans wants Northern Ireland to build on the momentum of their Euro 2020 qualifying play-off semi-final win over Bosnia and Herzegovina when they face Austria in the Nations League on Sunday night.

Thursday night was unquestionably the one that mattered most as Northern Ireland kept alive the possibility of reaching a second consecutive European Championships, but manager Ian Baraclough is determined his side should make their mark in the Nations League this time around.

After several months’ worth of build-up to the Bosnia match, postponed from its original date in March due to the coronavirus pandemic, Northern Ireland have had just a few short days to refocus on Austria but they are hoping the bounce of Thursday night’s penalty shoot-out victory helps make up for that.

“Any time you get a victory there’s always a bounce within the squad,” Evans said.

“We’re trying to take that into the next game. It’s always good to keep momentum.”

Baraclough must assess any tired legs in his squad after 120 minutes of nervous, draining football in Sarajevo, but he is keen not to disrupt a winning side and played down any immediate need to make too many changes as he looks at both Sunday’s match and Wednesday’s trip to Norway.

“I think we’ve been bright,” he said. “We want to build momentum as a team that’s used to winning games,” he said.

“There are a couple of lads in the squad that are due to play yet, if they do get some game time that’s all well and good but we haven’t made that decision yet.”

Austria beat Northern Ireland home and away in the Nations League in 2018, but have travelled to Belfast this week without the likes of Marko Arnautovic and David Alaba.

And, as Baraclough noted, Bosnia and Herzegovina also beat Northern Ireland home and away two years ago – something which ultimately had no bearing on Thursday night.

“We’re a couple of years on now,” he said. “There are some familiar faces in the squad for sure and in the main we know a good bit about their squad. We know it’s a tough ask, a difficult game for us, but it’s one that we’re relishing.

“It’ll be a good test to see where we’ve come from in two years.”

Windsor Park is set to welcome 600 fans for the game, a small but significant step amid the coronavirus pandemic, and something that Evans said the players are looking forward to after Bosnia and Herzegovina had around 1800 fans cheering them on in Sarajevo.

“It’s always been a big feature here, the crowd getting behind us,” the Leicester defender said.

“It’s not capacity but it will be good to have a good number in supporting us. The other night Bosnia had a couple of thousand in and it adds to the atmosphere. We’re looking forward to it for sure.”