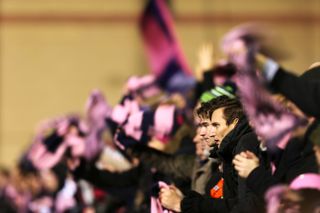 Non-league Corinthian-Casuals have hit out at the “utterly baffling” regulations which prevent them from admitting Dulwich Hamlet away fans to their FA Cup second qualifying round tie on Saturday.

On Tuesday, the Football Association published guidelines for fixtures in the competition which take place between clubs down the pyramid following discussions with Government over the latest coronavirus restrictions and the cancellation of pilot crowds.

FA Cup ties involving two ‘elite’ clubs within the National League set-up will be played behind closed doors, while those against teams from the tiers below will also be subject to strict admittance guidance dependant on venue.

As such, ​Isthmian Premier League outfit Corinthian-Casuals will only be able to sell tickets to home supporters.

The decision has left the Casuals less than impressed – with other fixtures involving two ‘non-elite’ clubs allowing fans from both the home and visiting teams.

“Following an announcement from the Department of Culture, Media and Sport in conjunction with the FA, Corinthian-Casuals will be unable to admit supporters of Dulwich Hamlet to King George’s Arena for the FA Cup 2nd Round Qualifying fixture on Saturday 3rd October,” a club statement read.

“As the coronavirus is clearly clever enough to differentiate between supporters of Step 2 and 3 clubs, in their wisdom, supporters of National League clubs – which include Dulwich Hamlet – are banned from spectating.

“We have held back on the sale of tickets for the time being, but will unfortunately have to limit these to Corinthian-Casuals and neutral supporters only.

“Please do not purchase tickets if you are a supporter of Dulwich Hamlet FC as both clubs have to adhere to these rules (we cannot believe we’ve had to type that).

“We’d like to place on record that as a club, we are not in favour of this utterly baffling ruling, we believe it is wholly unnecessary and we are having to put in place these restrictions under duress.”

All fans who attend the FA Cup qualifying ties will do so in accordance with the latest applicable National League system spectator guidance.

The FA said the position will be reviewed prior to the third round qualifying, when again the relevant Government guidelines at the time will be followed.