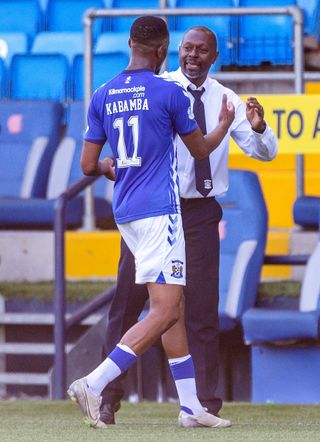 Nicke Kabamba grabbed a delightful double as Kilmarnock secured their first Scottish Premiership win of the season with a 4-0 victory over Dundee United at the BBSP Stadium.

The 27-year-old striker powered in a header in the 29th minute before fellow attacker Eamonn Brophy added a second at the end of the half with a fine finish.

Newly-promoted United, whose two previous wins this season had been on the road, fought back furiously in the second half but Alex Dyer’s side was in determined mood.

After the start was delayed to fix one of the goal nets United showed an early threat with Logan Chalmers driving wide of the target in the 10th minute.

Killie, with defender Zeno Ibsen Rossi making his debut after signing on loan from Bournemouth, slowly got into the game.

Tannadice keeper Benjamin Siegrist saved Chris Burke’s angled drive after he was played in by Kabamba, back in the side to partner Brophy.

Clevid Dikamona took over from injured defender Stuart Findlay to make his Killie debut before the home side took the lead.

Calum Waters’ delicious delivery from the left was met by the head of Kabamba, who gave Siegrist no chance from seven yards for his first goal of the season.

The United keeper was then asked to stop Aaron Tshibola’s long-range effort.

However, just after the board went up to show two minutes added time, and a minute after Connolly had headed wide of the target at the other end, Brophy latched on to a Greg Kiltie header inside the box and knocked a left-footed drive past Siegrist.

Midfielder Louis Appere replaced Peter Pawlett for the start of the second half and United immediately pressed Killie back.

A first prolonged spell of pressure which elicited several attempts on goal ended when striker Nicky Clark fired a drive over the bar.

Micky Mellon’s side kept Killie hemmed in with a string of passes and crosses and there would be at least a couple of handball shouts ignored by referee David Munro.

However, Kilmarnock had chances on the break.

In the 62nd minute Siegrist had to dive low to his left to keep Kabamba’s drive out and, as the Ayrshire side began to break with increasing purpose, Brophy tested the United keeper with two powerful drives.

And it was all over when Kabamba robbed the hesitant Connolly and curled in number three with some confidence.

There was time for midfielder Youssouf Mulumbu, who joined Killie for a third spell on Friday, to come on as substitute to help see out the game.

However, it was fellow substitute McKenzie, on for Brophy, who nonchalantly chipped in from Kiltie’s pass for the goal of the game.