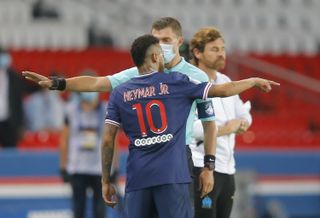 Neymar was one of five players sent off after a mass stoppage-time brawl marred Paris St Germain’s 1-0 defeat to Marseille at the Parc des Princes.

Brazilian Neymar, the world’s most expensive player, was shown a straight red for his part in an ugly fracas at the end of an ill-tempered game, which was settled by Florian Thauvin’s first-half goal.

Tempers erupted in time added on after Paredes’ shove on Benedetto. Kurzawa raised a boot at an opponent and players from both sides became embroiled in the fracas.

Neymar was the fifth player sent off after Brisard had consulted VAR, with replay footage clearly showing the forward punch Alvaro Gonzalez on the back of the head.

It was later reported that Neymar accused Gonzalez of racism as he walked off the pitch.

PSG’s defeat leaves the reigning champions without a win in their first two Ligue 1 matches and they currently sit in the relegation zone.

Marseille are fifth after a second straight win, one point behind early leaders Rennes.

Rennes forward Guirassy struck either side of Adrian Cubas’ equaliser for Nimes, who levelled it up for a second time through Zinedine Ferhat early in the second period.

Nayef Aguerd fired Rennes back in front and Benjamin Bourigeaud made sure for the visitors in time added on.

Luiz Araujo’s late goal clinched Lille a 1-0 home win against Metz and lifted them up to third in the table.

The Brazilian winger fired home the only goal in the 88th minute to leave Metz without a point or a goal from their first two matches.

Lens moved up to sixth after a 3-2 win at Lens, who had  Loic Bade sent off in added time.

Yoane Wissa converted a penalty for Lorient in the closing stages after he had been fouled by Bade, who was shown his second yellow card.

Reims’ Belgian defender Wout Faes was sent off for his challenge on Antonin Bobichon just before the break and Angers’ Romain Thomas received a second yellow card in the second half.

Dijon also had a player sent off in their 2-0 home defeat to Brest as Roger Assale was shown a straight red for his second-half challenge on Jean-Kevin Duverne.

In LaLiga, Valencia launched their new season with a 4-2 home win against Levante.

Jose Luis Morales twice gave Levante a first-half lead, but Gabriel and Maxi Gomez equalised for Valencia before Manu Vallejo clinched it for the home side with two goals in the final 15 minutes.

Real Valladolid drew 1-1 at home against Real Sociedad and Villarreal were also held 1-1 at home by newly-promoted Huesca.