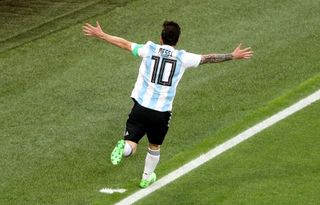 The 33-year-old sent shock waves through world football this week when he asked to leave Barcelona, where he has established himself as arguably the best player ever since joining as a 13-year-old.

However, amid speculation that his future could lie with either Manchester City or Paris St Germain, Newell’s supporters are hoping Messi might decide instead to return to home city Rosario.

Old Boys are the club at which Messi spent his formative years and, if he did return, he would tread the same path as compatriot Maradona in 1993.

Jamie Ralph, head of the club’s English-speaking supporters’ club, told the PA news agency: “Personally I think it’s a bit too soon, but what people need to understand is that Newell’s have a bit of a track record of pulling flagship signings out of nowhere, and that’s why people think it’s not that impossible.

“Diego Maradona was at Sevilla in Spain – he was only 33, so he was the same age as Messi – and he came back and signed for Newell’s, which was unbelievable at the time. This was the year before the ’94 World Cup.

“They also signed David Trezeguet, the French World Cup winner, and at the moment we have Maxi Rodriguez as the captain, he came back to play for Newell’s after leaving Liverpool.

“There’s this real feeling that for players who come through the club, money doesn’t matter, it’s really the feeling to come back and play for their shirt again in front of the fans and really feel that you’re part of that club again.

“There’s a bit of romanticism going on. I do think Messi will play for Newell’s one day, but personally think it’s a little bit too soon.”

The hopes of those who believe the time is right are founded on Messi’s repeated assertion that he would like to play for Newell’s in the Argentinian first division.

A banner at the Estadio Marcelo Bielsa – the current Leeds boss is another Old Boy – proclaims: “Your dream is our dream,” and some fans already adorn the backs of their shirts with “Messi 10”.

In addition, club vice-president Cristian D’Amico told TyC Sports: “Maradona came and everyone believed it was impossible. What Newell’s fan doesn’t have the dream to see the greatest in our shirt?”

With excitement mounting, fans were meeting at the stadium on Thursday to drive into Rosario city centre as they stepped up their long-running campaign to bring Messi home.

Ralph said: “It was seen as something that was maybe unrealistic at the time, but now Messi has told Barcelona he wants to leave, a lot of fans are wondering is this the time, is he ready to come back and play at Newell’s?

“It would be incredible, and it would be sickening as well to the noisy neighbours, Rosario Central.”