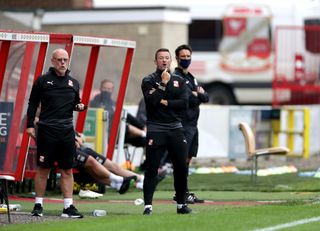 Swindon boss Richie Wellens could call on new signing Jonny Smith as the Robins face Charlton in the first round of the Carabao Cup.

The midfielder joined the club on a season-long deal from Bristol City last Friday and was involved in the pre-season friendly against his former club the following day.

Wellens may need to fill the gap left by the departure of Welsh winger Lloyd Isgrove, with the 27-year-old offered an extension to his one-year contract with the Robins but unable to strike a mutually agreeable deal with the club.

Fellow winger Kaiyne Woolery is also yet to agree new terms with the club, meaning his involvement on Saturday hangs in the balance.

Charlton boss Lee Bowyer will be missing Jonny Williams and Conor Washington, with both engaged in international football.

Midfielder Darren Pratley was rested during the club’s EFL Trophy loss to AFC Wimbledon and could return, but Jason Pearce is sidelined with injury for the foreseeable future.

Bowyer will also make a late call on the fitness of Chuks Aneke and Alex Gilbey.