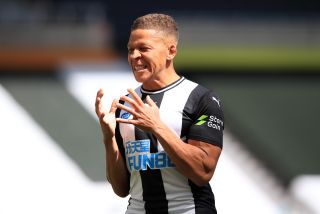 Newcastle boss Steve Bruce has revealed that Dwight Gayle will be out for between three and four months after undergoing knee surgery.

The striker suffered an injury in the recent friendly win against Crewe which was so severe that he has required an operation.

Speaking to the club website following Saturday’s friendly defeat to Stoke, Bruce said: “Unfortunately, Dwight got injured against Crewe 10 days ago and had an operation today and will be without him for three or four months.”

Bruce went on to say that the club were “trying to deal with it” by signing another striker, amid reports that Callum Wilson is close to joining from Bournemouth.

Newcastle have also been linked with Wilson’s former Cherries team mate Ryan Fraser, who is a free agent, and Norwich full-back Jamal Lewis.

Asked about Wilson, Bruce said: “It’s been publicised and all the supporters are eager to see it happen.