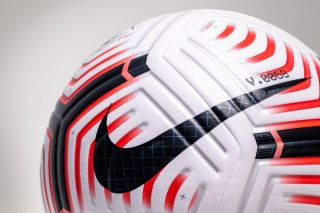 The new Premier League ball for the 2020/21 season has been released – and, well, it looks great.

It's the first version of the Nike Flight revealed since the new template for Nike's footballs was announced last month. With modifications, this will be the basis for all of the company's balls over the coming years.

Sporting a white, "laser crimson" and black look, the ball will be used in Premier League games from the start of the new season on September 12.

Two similar versions have been released for the buying public: the match official Flight version that will be used in Premier League games, costing £124.95, and a more affordable £24.95 Premier League Strike ball, which also comes with a cyan, "hyper royal" blue and "laser orange" colour scheme option. Both are already available to buy.

ALSO READ Best footballs to buy: Nike, Adidas or Mitre? Now you're allowed out, these are the top balls for training, matches – or playing in the park

The Nike Flight is the end product of an eight-year project Nike has carried out to improve consistency in footballs – particularly in travelling through the air. New AerowSculpt technology means improved aerodynamics: the ball is covered in ridges, which allows air to travel around it. This means it moves quicker in the air, with a straighter trajectory.

FourFourTwo has tested the template Nike Flight already, and the claims seem to stand up to scrutiny. Even in windy conditions, it is easier to track the ball's movement in the air, and it is less prone to unexpected swerves. It's also forgivingly receptive; this tester was picking passes out of the sky like Andrea Pirlo.

While the aerodynamic should be good news for goalkeepers – reducing the number of accidental worldies that leave unfortunate goalies wrong-footed – it has been welcomed by strikers, too.

England and Tottenham forward Harry Kane – who is sponsored by Nike – has praised the ball for limiting unexpected movements. “The most important thing about a ball is being able to put it where you want it every time,” he said. “Consistency is the most important thing, and it’s so important to have confidence in the ball you’re playing with.”

With grassroots football finally returning from coronavirus-forced hiatus, expect to see a few of these Premier League Strikes in the park ahead of the Premier League's big return in Septmber.

BEST FOOTBALL TRAINERS Nike, Adidas and Puma choices for astroturf, 5-a-side and playing in the park