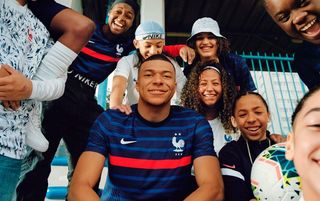 Nike has released a wave of new country kits ahead of this weekend's international games – with England getting a 1990s-inspired look for their new strips.

We now know how France, Portugal, Netherlands, Croatia, Poland and Turkey – who all qualified for Euro 2020 ahead of its postponement – will look when they take to the field for the Euros next summer.

That single red bar across the chest immediately conjures up two images in FourFourTwo's ageing, nostalgic head: Michel Platini at Euro 84, and Zinedine Zidane at the 1998 World Cup.

Of course, it's another No.10 leading the way these days, and Kylian Mbappe will be hoping he can follow in Zizou's footsteps once more by adding a European Championship winners' medal to the World Cup one he picked up in Russia two years ago.

The away shirt is simple, verging on... well, plain – but the tricolore running down each side is typical of understated Gallic style.

If that's not quite enough for you, check out their new training top inspired by French modernist art. This will presumably be on sale in the Tate gallery shop soon.

Another minimalist design here, with the green and red cuffs and stripes down the sides adding a little extra colour for the reigning Euros champions.

The fold down collar presents the exciting possibility of Cristiano Ronaldo flicking it up, Cantona-style, in self-satisfied pleasure after scoring a ridiculous goal against 'Play-off Winner A' during the group stage.

Hoops! This light blue strip has red, green and black hoops – although only the bottom ones loop around the back – in a combo that doesn't sound like it should work... but does.

Capped off with a smart little v-neck, we're fans. Oh, and you can both shirts customised with badges to honour the Euro 2016 and UEFA Nations League 2019 (yes, really) victories. And frankly, why wouldn't you?

Get the new Portugal away shirt here

The first thing to note about this shirt is that it is in a shade called 'Safety Orange'. The second thing to note is that, yes, that's a lion staring at you. Bet you're glad you're safe now.

This is the first tournament the Netherlands have qualified for since the 2014 World Cup, when they had a slightly disappointing home shirt.

Reverting the badge to black always feels reminiscent of the 1970s kits sported by Johan Cruyff, and that can never be a bad thing.

The cracked lion design is a bit love-it-or-hate-it, but it's great to have the bright Oranje back on a big stage.

Have you even seen a blacker kit? Some football shirts are black, but this is really black. Priest's socks black.

With the orange trim on the collar it almost doesn't look like a football shirt at all, but with the likes of Gini Wijnaldum, Frenkie De Jong and Mathhijs De Ligt wearing it, we think this dark shirt has a bright future.

Get the new Netherlands away shirt here

Ever seen a bad Croatia home shirt? No, of course not.

While maybe the squares could be a little smaller, if we're being picky, this is another great effort from our favourite do-they-still-count-as-dark-horses dark horses.

They'll be hoping to build on their runners-up medals from the 2018 World Cup next summer, and wearing this, they're likely to get some neutral support.

Get the new Croatia home shirt

You can look at this for a while, trying to work out whether it's a magic eye trick where some of the darker squares are actually lighter than the lighter squares.

But it's not. It's just black and grey squares.

We can but hope that England will be wearing their away shirt when the two sides meet in the group stage.

You can get the new Croatia away shirt here, if that's really what you want

A centred badge and off-centre Nike swoosh? The mid-2000s called and want to know if Adriano is the greatest Brazilian striker of all time.

Yes, this is an otherwise pretty straightforward white polo shirt, but let's face it: Robert Lewandowski is not a fancy man, and he does not need a fancy shirt to score lots of goals.

"Why don't we take the home kit, but make all the white bits red, and all the red bits white?"

Buy the new Poland away shirt

This is a thing of real beauty. Simplicity and grace. Like a Middle Eastern Peru.

Why have Turkey inverted their usual red-for-home and white-for-away colours? We don't know, and we don't care.

This throws back to a couple of similar away shirts from the past but improves them hugely. This is the kit to beat.

Get the new Turkey away shirt

SEASON PREVIEW Every team rated in our 196-page summer special