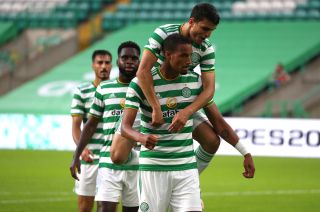 Neil Lennon praised Christopher Jullien for his contribution to Celtic’s 6-0 thrashing of KR Reykjavik in the Champions League first qualifier at Parkhead.

The French defender was criticised for his display and conceding a penalty in the 1-1 Premiership draw against Kilmarnock last time out but he set the Hoops on the way to victory against the Icelandic minnows by setting up Mohamed Elyounoussi for the opener after only six minutes.

And after striker Odsonne Edouard pressured defender Arnor Adalsteinsson into an own goal, Jullien headed in a third on the half hour mark to put the Hoops in control.

Second-half goals from left-back Greg Taylor, his first for the club, Edouard and Elyounoussi again took the Scottish champions into next week’s second qualifier against Hungarian side Ferencvaros or Djurgardens of Sweden.

Boss Lennon had described Jullien as rusty after the Killie game but following the comprehensive Euro win, he said: “I thought he was excellent, you saw what he was good at tonight.

“Not only setting up the first goal but scores a great goal from a corner.

“I thought defensively he looked more like himself which I thought he would do. The more he plays the better he gets. He can be delighted and Nir Bitton had a good game alongside him.

“Lot of positives, sets up nicely for the weekend and the next round. It was a good night’s work.

“Really important to get 90 minutes into the legs and negotiate the tie.

“To score six goals and keep a clean sheet is very good, so  I am pleased with a lot of that tonight. We look forward to Saturday now.”

Elyounoussi, in his second loan spell at the club on loan from Southampton, was named man of the match following his double and Lennon admits he is expecting more from the attacker this season.

He said: “Last season he was very good up until it was curtailed because of a broken toe.

“You see what he brings to the team. He is powerful, he doesn’t look dynamically quick, he just wears people down. He is really smart and the two goals tonight will do him the world of good as well.”

Asked about Ferencvaros or Djurgardens in the next round, Lennon said: “I don’t really have any preference. They are two well organised teams. I’ve been impressed with Ferencvaros from what I’ve seen from them so far.

“It will be interesting to watch the game on Wednesday night, I think it will be tight.”

KR Reykjavik boss Runar Kristinsson admitted it was a “very difficult ” night for his side.

He said: “We could have expected it before the game but wanted to keep a clean sheet longer than two minutes.

“Everything is much quicker here than Icelandic league and we gave them a goal after two minutes which made it much harder for us.

“We were a bit nervous and you will get punished if you don’t defend enough against a quality team like Celtic and we didn’t do that in the first half.”