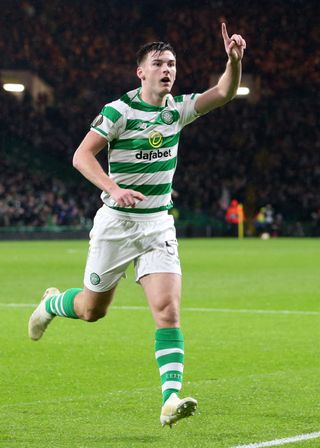 Neil Lennon has told Kieran Tierney that he is more than welcome at Celtic Park.

The 23-year-old defender, a boyhood Hoops fan, this week revealed the level of abuse he was subjected to, mostly on social media, when he signed for Arsenal last summer for a reported fee of £25million.

Tierney, speaking on Open Goal’s ‘Keep the Ball on the Ground’ show, also spoke of seeing the word ‘Judas’ painted outside his home two days later.

Hoops boss Lennon said: “We don’t want him to feel uncomfortable coming back because he is more than welcome here that’s for sure.

“He is a great player. He has already won a major honour at Arsenal and he went with everyone’s best wishes.

“Sometimes you get people on social media pretending to be Celtic fans and it is a platform that leaves you open to abuse or praise, whatever way you want to look at it.

“There is always a little bit of soreness with fans when a top player or top manager leaves a club and goes elsewhere.

“But I think 99.9 per cent of the supporters at Celtic think the world of him.

“Social media is not real. People can be a hero one day and a villain the next day. It is just not the real world.”

Lennon is encouraged about the prospect of fans returning to Celtic Park next week.

First Minister Nicola Sturgeon on Thursday gave the green light for a limited amount of spectators to attend matches from September 14 as long as the spread of coronavirus stays under control.

Reports claim Celtic’s home Premiership match against Motherwell a week on Sunday could be used as a test match for some supporters to attend games.

“It would be fantastic,” said Lennon, who believes striker Leigh Griffiths’ continuing calf injury will keep him out of Scotland’s upcoming double-header against Israel and Czech Republic.

“The club are collaborating with the government to try to make this happen and later on down the line open the gates even more so it would be brilliant.

“It is good having football back but obviously that element is missing and it is a huge element in the game that we all want back and that is the support.

“From the players’ experience a little bit of noise would make all the difference.

“We miss our supporters terribly, they bring so much colour and noise to the game. I imagine it would be a significantly low number coming in.

“Getting any support in the stadium is better than no support. Hopefully it will work and be beneficial for everyone going forward.”

He said: “I am not here to talk about who we could sign and who we couldn’t sign but I think it is common knowledge there has been interest expressed.”

Lennon also confirmed there has been interest in Australia midfielder Tom Rogic.

“I like Tom Rogic, I think he is a fantastic player. We will see how that pans out,” he said.

On newly-promoted Dundee United, who sit in fourth place with seven points from four games, Lennon said: “They have made an excellent start, particularly away from home.

“They will be delighted to be back in the top league and they are a welcome addition. We are looking forward to the game.”