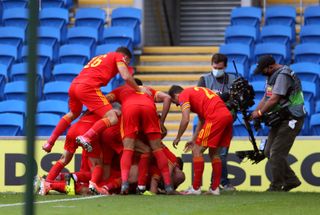 Wales’ unbeaten run continued with Neco Williams scoring a dramatic stoppage-time header in a 1-0 victory over Bulgaria in Cardiff in the UEFA Nations League.

Liverpool teenager Williams, sent on as a 65th-minute substitute, met Jonny Williams’ cross at the far post in the fourth minute of injury time for his first goal in senior football.

WHAT A FEELING!!! Buzzing to have scored the winner on my home debut for my country 🏴󠁧󠁢󠁷󠁬󠁳󠁿🤩 doing my family proud. Gutted the fans weren’t there to be in the moment. @FAWales#getinnecopic.twitter.com/lwDZonXdR4— Neco Williams (@necowilliams01) September 6, 2020

The Dragons opened their Nations League group B4 campaign with a 1-0 win in Finland on Thursday, and now have four straight wins and are unbeaten in eight games.

Finland bounced back as substitute Fredrik Jensen fired them to victory over the Republic of Ireland after just 18 seconds on the pitch.

The defeat followed Thursday night’s 1-1 draw in Bulgaria, leaving the Republic still chasing a first ever Nations League win ahead of next month’s Euro 2020 play-off in Slovakia.

Barcelona youngster Ansu Fati became Spain’s youngest goalscorer, breaking a record which had stood for 95 years, as his side beat Ukraine 4-0 in group A4.

Fati, aged 17 years and 311 days, had already broken records for Barcelona’s youngest goalscorer in La Liga and the Champions League when he netted via a post to add another landmark to his collection.

Sergio Ramos had already converted a penalty won by Fati, and added a header for his second. Manchester City newcomer Ferran Torres added a fourth in the 84th minute.

In the same group, Germany were held to a 1-1 draw in Switzerland after Ilkay Gundogan’s opener was cancelled out in the 57th minute by Silvan Widmer.

Elsewhere, Russia earned a narrow 3-2 victory in a close-fought match with Hungary in group B3.

In the same group, Serbia and Turkey played out a goalless draw.

In group C3, Slovenia earned a 1-0 victory over Moldova while Greece beat Kosovo 2-1.

The Faroe Islands secured a 1-0 victory over Andorra while Malta drew 1-1 with Latvia in group D1.