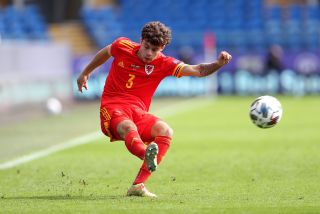 Wales hero Neco Williams set his sights on a Wembley date with England after scoring a dramatic Nations League winner against Bulgaria.

The Liverpool teenager, making only his second Wales appearance as a 65th-minute substitute, headed home Jonny Williams’ far-post cross in the fourth minute of stoppage time to secure a 1-0 win in Cardiff.

Now the 19-year-old is likely to make his first start against England – who tried to convince the full-back that his future lay with them – in a Wembley friendly on October 8.

“Next month we’ve got England and that’s going to be a great game,” Williams said after scoring his first goal in senior football.

“With the quality we have in this team we’re going to prove we’re capable of beating them.

“I’m sure it’s going to be a great game. All the boys are excited and can’t wait for the game.”

Wrexham-born Williams could have played for England due to a grandparental qualification.

But he represented Wales through the age grades and committed himself to Ryan Giggs’ team when he won his first senior cap in a 1-0 win in Finland on Thursday.

“England were trying to ring my agent a lot and wanting to speak to me,” Williams said.

“But I weren’t having none of it, my family’s Welsh, I’m Welsh and my friends are Welsh. So it was always going to be Wales.”

On his rise at Liverpool – where he picked up a Premier League winner’s medal last season – he added: “I would just say I’m improving as a player and learning from some of the best players in the world.

“To watch them and watch what they do, that’s only going to improve me as a player.

“If I keep humble and keep working hard, keep getting opportunities, I’ll work hard to show both gaffers (Giggs at Wales and Jurgen Klopp at Liverpool) what I can do.”

Giggs praised his side’s desire and determination after a fourth successive win stretched their unbeaten run to eight games.

Wales have not lost since June 2019 and the last two wins have been secured by late goals, something with which he was familiar with during his Manchester United playing career under Sir Alex Ferguson.

“It’s a good trait to have, we keep going,” Giggs said.

“It wasn’t the flowing football we’ve produced in the past. I think that’s to do with the time of the season and the fitness and sharpness of the players.

“The two teams we’ve played are a month into the new season. I thought that played a part, and we started sluggish. We looked flat.

“The second half was much better, although we didn’t create a lot of chances.

“We’ve had some good clean sheets, and when you have clean sheets it always gives you a chance to produce the wins.”

Bulgaria manager Georgi Dermendzhiev was left to lament another late goal against his team after the Republic of Ireland had equalised in Sofia on Thursday to force a 1-1 draw.

“You have to play until the final whistle and we weren’t concentrated enough,” Dermendzhiev said.

“But we had a lot of positives because we had players injured and had to make changes.”