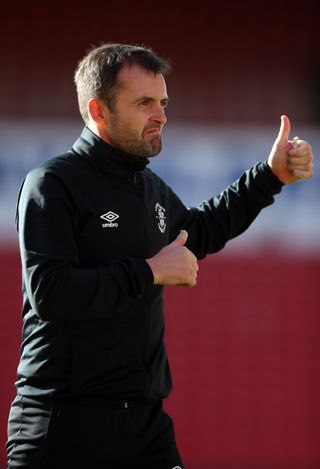 Luton manager Nathan Jones was delighted after his side’s 1-0 victory against Barnsley at Oakwell in their opening fixture of the Sky Bet Championship season.

James Collins’ second-half strike was enough to seal it for the Hatters as Barnsley failed to capitalise on their opportunities in the attacking third.

The forward made the most of Pelly-Ruddock Mpanzu’s assist in the 71st minute to get the Hatters’ campaign off to the ideal start as two of last season’s strugglers faced off.

And Jones said there are always goals in his team when Collins plays.

“Apart from their chance it’s about as good an away performance as you’re likely to see in terms of solidity, in terms of what we did and the way we pressed,” said Jones.

“These are nowhere near where they were last season, these are a great team and I think we just played very, very well.

“We organised very well and limited them to very little. We just lacked a little bit of quality in the final third.

“If we did then we would have had more chances, but when you’ve got a goalscorer like James Collins, you get opportunities and he puts them away.”

Jones felt his side had opportunities to win by more.

“Collins was a great chance, good movement. We switched play, we got out and it’s a real glorious chance you expect him to put away.”

Barnsley boss Gerhard Struber was disappointed with some aspects of his side’s performance and said they must learn quickly from the defeat.

“We have on the physical side a disadvantage and we have to play on the ground very quick and we need a high discipline on the ball,” he said.

“We forget in many situations and today in the moment the opponent found a good momentum that we had not so much control of the ball in the end.

“And that is the reason that we lose this game and that is what we have to make better in the next games.

“I think this is not a surprise for us when we forget our style on the ball and it is difficult especially when we must play long balls like the other teams, then we have a disadvantage.

“I think we forget this, especially in the second half, and I think this is a peak point for my players that we know what we have to do and I think it’s a big learning today.”