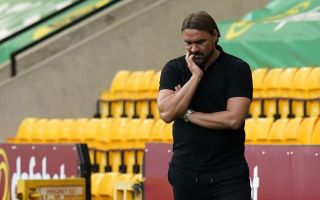 Daniel Farke claims he will bleed “yellow” blood to take Norwich back to the Premier League.

The Canaries, relegated last term after just one season back in the top flight, begin life back in the Sky Bet Championship with an away trip to Huddersfield on Saturday.

Norwich finished 13 points adrift at the foot of the Premier League but that has not dulled Farke’s enthusiasm.

“My blood is already yellow and for that I am keen to bounce back with this club,” said the German at a press conference.

Farke has lost Jamal Lewis and other key players such as Todd Cantwell and Emiliano Buendia could also move on.

Despite that he can still call upon the bulk of the squad that won promotion two years ago and, having won plaudits for their style of play last year, Norwich are among the favourites for promotion.

“That doesn’t influence us,” Farke said. “You don’t have any advantage because only a few weeks ago you played in the Premier League.

“It doesn’t affect us what the other clubs and the bookies think. The truth is on the pitch.”

Farke said: “You can see his handwriting on the team already. I am impressed that he has managed to bring so much of his philosophy into the hearts of his players in such a short pre-season.”

Bournemouth, who were relegated after five seasons in the Premier League, are also starting life under a new manager.

A raft of star names including Ryan Fraser, Callum Wilson, Aaron Ramsdale and Nathan Ake have left but promotion is a clear target.

Sheffield Wednesday begin what could be a difficult season after their 12-point deduction with a tough trip to Cardiff. The Bluebirds, bolstered by the arrival of Wales striker Kieffer Moore, will be hoping to better last season’s play-off appearance.

“Our first game is probably as tough as it comes,” said Owls boss Garry Monk. “We want to try and get as many points on the board as possible and our aim is to start well.”

Wycombe enter the second tier for the first time with a home clash against fellow promoted side Rotherham.

Manager Gareth Ainsworth said: “My aim this season is to enjoy it. Whatever happens on Saturday, it will be the highest position that Wycombe Wanderers have ever been in – win, lose or draw.”

Bristol City, who also have a new manager in Dean Holden, host promoted Coventry while Nottingham Forest, who capitulated with a play-off place within grasp last term, are at QPR.