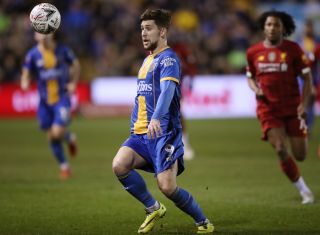 The 21-year-old has joined Motherwell for the season following temporary spells at Morecambe, Oldham and Shrewsbury in the past three years.

The versatile player has scored 29 goals on his travels and also has five first-team appearances with Wigan under his belt.

Robinson told Motherwell’s official website: “I’m really pleased to get Callum signed. We’ve tried a few times to get him before, so we’re delighted to have been able to this time.

“He can play anywhere across the front three. He will add more goals and creativity to our front line, and add more competition for places.”

“I’ve only heard good things about the club,” Lang said. “It sounds like the perfect place for me.

“The manager has told me all about how we train, how we play and how he can improve me as a player. I think I can really push on in this team and help them.

“I spoke to Cedric Kipre about coming here as well and he spoke very highly of the club. It was a chance I absolutely had to take.”