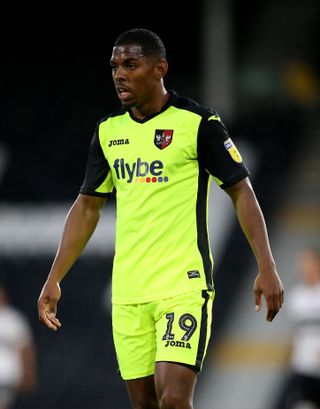 Tristan Abrahams was hailed as a striker of Championship quality after his two-goal performance helped Newport secure another big knock-out shock.

Abrahams struck twice in the first half to send Mike Flynn’s County into the second round of the Carabao Cup after victory over a poor Swansea side.

It was League Two County who looked like they belonged in the second tier and not Swansea with striker Abrahams and captain Matty Dolan outstanding.

“I thought we were excellent from start to finish and the only disappointment is we didn’t score more goals,” said Flynn. “The amount of work Tristan got through was unbelievable and he looked like a Championship striker.

“Matty reads the game so well and is comfortable on the ball. I thought he was superb.

“It’s a big confidence boost because Swansea are a very good team. I’m over the moon.

“Everyone to a man was spot on. It’s brilliant winning a Welsh derby, it’s just a shame the fans weren’t here. Rodney Parade would have been rocking.

“It’s the times we are in and we can’t do anything about it. It was the first time for us playing behind closed doors and I didn’t enjoy it if I’m honest.”

Swansea were poor from start to finish and did not deserve anything as they tumbled out of the cup.

It means Newport added their Welsh rivals to their list of scalps in the last two seasons.

Newport have beaten Leicester, Leeds and Middlesbrough, drawn with Tottenham, and faced Manchester City in that time.

Abrahams gave them the lead when he tapped home after Ryan Haynes headed across goal.

He doubled Newport’s lead when Swansea goalkeeper Freddie Woodman ran out to clear a long ball but could only send his clearance straight into Abrahams who gobbled up the rebound.

Swansea never looked like mounting a comeback in the second half even though Wayne Routledge had a goal ruled out for offside.

“It was obviously a disappointing performance and result. Congratulations to Newport on reaching the second round,” said Swansea head coach Steve Cooper.

“We were second best throughout the game and didn’t do the non-negotiables. We left it too late to get back into the game.

“There are no excuses. Take nothing away from Newport – we had enough good players on the pitch to win the game.”

Cooper also confirmed he has received no bid for Swansea captain Matt Grimes who is interesting Watford, but that Bersant Celina is close to joining French side Dijon.

“This game highlighted areas where the squad needs strengthening,” Cooper said. “There has been a lot of interest in Bersant from Dijon in France and the club has received an offer.”