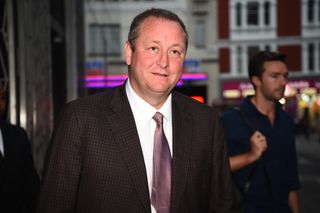 Mike Ashley is bracing himself to remain at the Newcastle helm next season after all but giving up hope of pushing through a takeover.

The Sports Direct tycoon is working to keep alive talks with Amanda Staveley’s largely Saudi-funded consortium, although they have shown little appetite for resolving the issues which prompted them to withdraw their £340million bid for the club last month.

That decision came amid a hiatus in the Premier League’s owners’ and directors’ test amid disquiet over the consortium’s links to the Saudi state and TV piracy.

Staveley’s PCP Capital partners, who are backed by Saudi Arabia’s Public Investment Fund and the Reuben Brothers, had paid a £17million deposit, around £9million of which has been forfeited as a result.

The Paris-based Bellagraph Nova Group’s interest, which emerged in the wake of Staveley’s withdrawal, has never progressed past Ashley’s legal team with the sportswear magnate only willing to engage with prospective buyers once he has proof of funds and a sizeable deposit.

An offer of £280million never came close to earning BNG, who claimed to have enlisted the support of former Newcastle skipper Alan Shearer, a seat around the negotiating table and the PA news agency understands that avenue is no longer being pursued.

American businessman Henry Mauriss made a verbal offer of £350million as PCP’s exclusivity period expired, but that has yet to be firmed up and the clock is ticking.

It is understood the Ashley camp is seeking definitive answers within days, but the Magpies owner is resigning himself to yet another season of ownership having dared to believe his search for a buyer might finally be approaching a successful conclusion.

His reign currently extends to more than 13 years, a period for much of which the club has been up for sale, but remains on the shelf.

In the meantime, it is he who will have to fund what limited transfer business head coach Steve Bruce will be able to do this summer.

Goalkeeper Mark Gillespie and Republic of Ireland midfielder Jeff Hendrick have already been added to the squad, while Newcastle are also hoping to seal a loan deal for Arsenal defender Rob Holding.

However, their real need is in attack with last summer’s £40million summer signing Joelinton having managed just two Premier League goals, Andy Carroll struggling to stay fit and Dwight Gayle facing a spell on the sidelines with a knee injury.