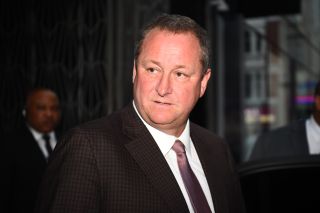 Newcastle owner Mike Ashley is gearing up for a legal battle with the Premier League over the collapse of a Saudi-backed takeover.

Ashley has instructed lawyers Blackstone Chambers over a simmering row with the governing body after Amanda Staveley’s consortium withdrew its £340milion offer in July following a 17-week wait, ultimately in vain, for officials to complete their owners’ and directors’ test.

A statement on the firm’s official website on Monday said: “Shaheed Fatima QC and Nick De Marco QC are acting for Newcastle United FC and Mike Ashley (instructed by Dentons) in a dispute with the Premier League about its rejection of a takeover bid made by PCP Capital Partners, the Reuben Brothers and the Public Investment Fund of Saudi Arabia (PIF) based on its Owners and Directors test.”

Shaheed Fatima QC and Nick De Marco QC are acting for Newcastle United FC and Mike Ashley in a dispute with the Premier League about its rejection of a takeover bid made by PCP Capital Partners and others.https://t.co/2fdPIHl6Yl— Blackstone Chambers (@BlackstoneChbrs) September 14, 2020

Newcastle claimed last Wednesday that the bid had been rejected by the Premier League, who insisted the following day that it had not.

Having taken legal advice as he attempted to resurrect the deal, Ashley accused the governing body of not acting “appropriately” in repeatedly seeking further clarification over the relationship between the Saudi state and the PIF, a major stumbling block alongside the issue of TV piracy.

The Premier League responded by insisting the proposed takeover could only proceed to a suitability assessment once “all appropriate information” had been provided and repeated its offer of independent arbitration, something which had already been rejected by the prospective buyers.

Despite Ashley’s best efforts to rekindle the process behind the scenes, it appears to have reached something of an impasse, and the latest development represents an attempt to clear the path once again.

The PA news agency understands that far from simply seeking compensation, Ashley is trying to prove there is no case in law to block the takeover, and engaging two renowned barristers to fight his corner is an indication of his determination to leave no stone unturned.

Sources close to the Staveley camp described the league’s stance as “disingenuous” following the decision to withdraw the consortium’s offer having insisted it had provided all the necessary answers.

It is understood they are still monitoring the situation, but it would take a significant change in outlook from one side or the other to enable a breakthrough, and it appears Ashley is now attempting to force such an alteration.