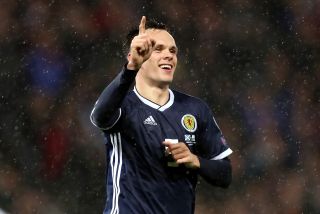 The Tannadice boss has been giving out weekly updates on the Scotland international who has been out with an ankle complaint since a 1-1 draw with St Johnstone in the first Premiership game of the season on August 1.

Asked about Shankland again on a pre-match Zoom broadcast conference, Mellon said: “Are you ready? He’s back! He’s back!

“Lawrence is fit. Nobody has tried to buy him this week before anyone asks that.

“He’s fit and we are delighted he is back in the group again and he’s had a good few days training too so Lawrence will be coming to the Rangers game with us.

“Obviously you want your biggest influencers available all the time.

“And it’s no secret that Lawrence for Dundee United has been a big influence on everything that’s been done well since he’s probably come to the football club.

“So to have him back and available, along with other lads makes the group stronger, give us more options and obviously to get a Scottish international back into your group is a terrific boost for us”

Defender Mark Connelly, however, will miss the trip to Glasgow with an ankle injury.

Mellon said: “He rolled his ankle early this week in the first training session, so he’s going to be out for a number of weeks but he has made early and good progress.”

Connelly is under investigation by the club after allegedly refusing to wear a mask when traveling in a city taxi.

Mellon said: “In terms of investigation, that’s internal, that’s something that legally has to be done with the football club.

“And, if anything comes out of that, then, I’m sure that you will be, along with myself, the first to hear about that.”

He said: “I can’t say it’s over the line yet, but we are hoping that maybe later on today that gets closed.

“We call him Flo and the reason we are bringing him, even at the young age he is, you can see where the improvements can be and how we can make them.

“He is a talented lad, very confident, technically very good. He will work for the team and plays at a good intensity.

“There is no pressure on him to come in and do it right away but he could come in and make an impact now.

“I believe he could play in the Premiership now. I am excited about the potential and we think he can become a very good player.”