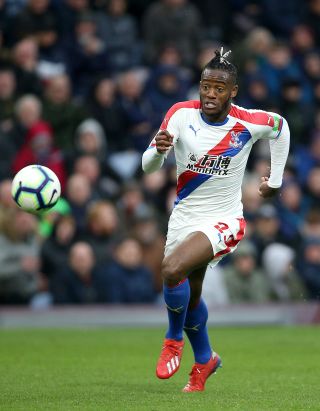 Chelsea forward Michy Batshuayi has joined Crystal Palace on a season-long loan after signing a new deal with his parent club.

The Belgium international returns to Selhurst Park after a successful spell with the Eagles in the second half of the 2018-19 campaign.

Batshuayi scored six goals in 13 appearances for Palace to help them retain their Premier League status, but will be out to help them achieve greater honours this time.

He told the Eagles’ official website: “My target is to win a lot of games with the team because Palace is a good team and a dangerous team for the big clubs.

“I want to win and to score, to do my job to help the team and I know my team-mates will help me as well.”

Batshuayi will hope to play regularly for Palace and earn a spot in Belgium’s squad for next summer’s European Championship.

The 26-year-old agreed new terms with Chelsea before his departure and has a contract at Stamford Bridge until June 2022.

Eagles chairman Steve Parish said: “I am absolutely delighted to welcome Michy back to Crystal Palace.

“He is a player we’ve long admired, as well as being an immensely popular figure with everyone here during his last successful spell with us.

“With other top European clubs vying for his services it is immensely pleasing that Michy chose to come back to help us up the table as well as cementing his place in the Belgium squad for next summer’s Euros.”

Boss Roy Hodgson added: “He made a great impact at the club in his previous loan spell, albeit only five months long, displaying a goal scoring threat which we very much needed at that time and we are confident he will produce again.

“As a player who will help to convert our chances in to goals, Michy will be another valuable addition to the two new signings we have made this summer.”

Batshuayi is expected to make his second debut for Palace on Saturday when Southampton visit SE25 for the Premier League opener.

He could line up alongside fellow new recruit Ebere Eze if the attacker can recover from the groin injury he sustained in a friendly with Charlton last month.

Wilfried Zaha, despite continued speculation about his future, has had a strong pre-season with three goals and will be available to Hodgson, the PA news agency understands.

The Palace manager will be without several defenders for the clash with Saints though, but it should present an opportunity for academy graduate Tyrick Mitchell.

Mitchell, 21, has been a regular in pre-season with first-choice left-back Patrick Van Aanholt only recently back in training after surgery on a dislocated shoulder and the Dutch full-back will be absent at the weekend.

Defender Nathan Ferguson signed for the club earlier this summer on a free transfer from West Brom but joins Gary Cahill, James Tomkins and Mamadou Sakho (all hamstring) on the treatment table with a knee injury.